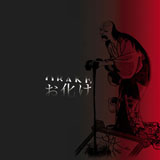 An Obake, for the ignorant among you, is a form of shape-shifter or ghost in Japanese folklore – Indeed, the word translates as ‘a thing that changes’ – but for our purposes, Obake is an avant-doom supergroup composed of some of the finest experimental musicians that Europe has to offer.

Fornasari’s contributions in particular firmly place the music herein into the bracket of ‘art’ – he soars operatically above and through the music, then plummets down into the lower registers to intone, command, insinuate, mutter, howl and screech like a thousand chattering apes.

His hollow, tombstone-scraping croak is the equal of any ‘Brutal Death Metal’ grunter, and his powerful baritone like a dark twin to the similarly gifted Mike Patton. Indeed, hearing his voice across the course of Obake, one could very easily believe that he was the mutant offspring of Patton and Attila Csihar – the demonically-throated voice of Sunn, Mayhem, Void Ov Voices and Aborym – so fluid, stentorian and damned dark are his tones, and, like Patton, he doesn’t merely sing – he vocalises, using his voice as an instrument for adding layers of texture.  Fornasari elevates what would already be a seriously tasty musical proposition into a must-hear.

The ten tracks on Obake fall into two basic categories, with some amount of crossover: Doomed piledrivers with a loping hypnotic groove à la Sleep’s Jerusalem and an artful edge, very much along the same lines as Fantomas’ ‘Der Golem’ from The Directors Cut, and drifting semi-ambient soundscapes, imbued with a sense of menace and an improvised feel. These latter cuts are not always successful – on the Æthenor-flavoured ‘Szechenyi’ , the clattering drums and random harmonics go essentially nowhere, and immediately following it up with the ambient, slightly soporific, ‘Letters To Ghosts’ was a bad decision – but they serve to throw the heavier, denser tracks into sharper relief and to highlight the interplay between the four musicians.

‘The End of It All’ is a schizophrenic beast that combines the hypno-nod doom-groove with ambient drift, sudden bursts of spastic energy and coruscating electronics.

Coming straight off the back of the dreamily ambient ‘Letters To Ghosts’, ‘Ponerology’ is an ugly, jagged, dissonant dirge that slaps the listener back into harsh reality suddenly, like a faceful of freezing water. The bass carves out tolling arcs beneath needling guitar and clanging electronic manipulations as Fornasari turns the menace up to eleven, culminating in shrieking sensory overload.

There is a little of the spirit and feel of Tool in ‘The Omega Point’, and a lot of Patton too, built as it is around a prowling bassline, liberal heaps of fuzztone guitar, rhythmic invention , stabs of synth and more of those semi-operatic vocal textures. The menacing, rough edge that the powerful vocal tones have here is where Attila Csihar is most obviously brought to mind, specifically his work on Mayhem’s Ordo Ad Chao.

Now, the Patton thing is in FULL effect on ‘Destruction of The Tower’, as it is – in this writers opinion – a dead ringer for Fantomas’ ‘Der Golem’. Lurching low-slung guitar and bass push the track along like a musical bulldozer as Pándi hangs back from the beat slightly, until the song eventually drifts apart into ambient space.

Vocally alternating between low, menacing hushed tones, operatic crooning , distorto-shrieking, and moaning, sighing processed clouds of sound Fornasari is Patton’s vocal double. Not that that’s a bad thing – far from it, in fact, as it just happens to be my personal favourite track on the album – but it is very close to the bone indeed. The suspicion is that it wasn’t intentional, but it IS audible….well, to ME anyway.

Closing Obake are two more ambient soundscapes, one light, but still spooky, in tone and one significantly darker – the airy ‘Endocrinal Pineal Gland’ , and the buzzing, darkly swarming thrum and tumbling percussive clatter of ‘Grandmother Spider’, respectively. As with previous instrumental ambient pieces on Obake, although the musicians play off each other well and their mastery of different tones and moods is highlighted, ultimately, neither piece goes anywhere in particular.

So there you have it. Obake is mostly a gripping piece of work with some serious musical chops on display, without ever being ‘flash’, slightly let down by directionless interludes that do work toward shoeing the level of interplay between the band, but ultimately prove somewhat pointless. A damn shame, as a more solid album from Obake could have been truly monstrous – the band has it in them to be up there with avant-doom heavyweights such as Khanate and Bloody Panda. 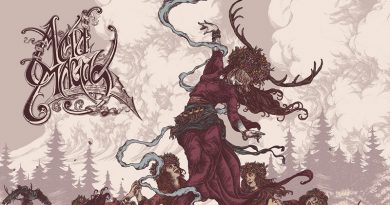