In the interests of full disclosure, let me start by saying that The Neptune Power Federation are probably my favourite active band. Of all the wonders and oddities that I’ve stumbled across on Bandcamp over the years, TNPF holds a special place in my heart for exemplifying everything that is awesome and life-affirming about heavy music. That said, my heart is a fickle and inconstant thing that has been hurt too many times by bands releasing sub-par sequels to records I love, and it pains me not to tell you, dear reader, when a slab of wax falls short of expectations. Thankfully I won’t need to do that today as Le Demon De L’Amour is forty minutes of pure rock ’n’ roll brilliance.

For those who need more of an introduction, TNPF are a five-piece from Sydney who have been fighting the good fight for nearly a decade and are clearly aware of the power of daft stage names. While charismatic vocalist Screaming Loz Sutch aka Imperial Priestess is the obvious focal point of the band, the twin guitar attack of Search and DesTroy alongside Inverted CruciFox and the thunderous rhythm section of bassist Jaytanic Ritual and drummer River Sticks are equally formidable. Le Demon De L’Amour is the band’s fifth album (although bear in mind their first record back in 2013 featured a different singer) and shows TNPF tackling its trickiest challenge yet: returning the love song to its rightful place in the heavy rock pantheon.

Summing up TNPF’s sound isn’t straightforward as the band show off a smörgåsbord of rock and metal influences from across the ages. Perhaps a good point of reference is some of the cover songs that they’ve released over the last few years, which have included versions of tracks by Queen, Rainbow and Motörhead. They definitely possess some of the bombast and showmanship as the former, the classical influences and proggy tendencies of Ritchie Blackmore’s mob, and feed it all through a filter of gutter-dwelling scuzz and fury that would have made Lemmy smile.

At the risk of going completely off-piste (bear in mind I’m writing this well past my bedtime and may have had a drink or two) we’ve lived through too many decades of cynicism to not realise that some of the central tropes of rock music are, frankly, a bit ridiculous. This might explain why it’s so often treated with a dismissive wave of hipster irony. TNPF remind me of artists like Monster Magnet’s Dave Wyndorf and Supersuckers’ Eddie Spaghetti, in that they’re clearly aware of this but demonstrate that rock can still be vital and exciting in a way that no other forms of music can be. I’ve no way of knowing whether it’s actually the case, but TNPF always sound, to me anyway, as if they’ve had an absolute blast recording their music and this enjoyment is hugely infectious.

The album kicks off with Weeping On The Morn, which begins with some tasteful dual guitar harmonies before launching into an unholy juggernaut of 70s boogie rock colliding with a hoverboard of 80s sleaze metal. It exemplifies the band’s more-is-more ethos with boatloads of gnarly riffs, an infectious chorus, a mid-song breakdown, and a brief spoken word section. My Precious One treads a similar path, driven by a propulsive riff that flirts with the boundaries of thrash, an even more epic chorus, and an absolutely ripping guitar solo.

Baby You’re Mine throws you a curveball, or to use a sporting metaphor I actually understand, bowls you a googly. Building from a decidedly funky bass riff and featuring keys that wouldn’t have sounded out of place on a classic Deep Purple album, the whole track is centered around a chorus that will be in your head for days. It practically defies you not to dance like a fool and do that thing with your head that makes you look a bit like a chicken. Loving You Is Killing Me finishes off the A-side in choppy metallic fashion.

Flipping the disk over, Stay With Thee quickly demonstrates that the B-side isn’t going to give you any respite from the relentless rock assault. Five minutes of filthy boogie rock played at breakneck pace topped off with another cracker of a chorus and a supremely widdly guitar solo is pretty much everything you could ask for in a song. It’s a highlight in an album full of highlights. Emmaline slows the pace a little but sustains the groove with another boogie-flavoured verse and a decidedly different chorus. As ever, TNPF likes to mix things up and this track features another of the Imperial Priestess’s inimitable spoken word sections. I can’t imagine many other people in the world of heavy rock using the word ‘swain’.

Madly In Love is another great tune, sounding like Motörhead covering a bubble-gum pop song, but with a whole ton of other stuff thrown into the mix as well. Good as it is, it’s merely an appetiser for the epic craziness to follow, however.

It’s rare these days to come across something genuinely surprising, but TNPF manage it. They close the album with We Beasts Of The Night, a tribute to John Steinman (the guy who wrote Bat Out Of Hell). Bringing in singer Chris Penney from Melbourne’s Private Function, they deliver a power ballad duet that’s every bit as grandiose and overblown as anything you could find in a 70s rock opera and then some. Going from a spoken word intro to a delicate finger-picked acoustic guitar section, to an epic fists-in-the-air rock anthem, if this doesn’t have you grinning like an idiot and shouting along then I think there might a little part of you that’s dead inside.

After five albums, most bands are starting to run out of steam and are treading water creatively. With Le Demon De L’Amour, The Neptune Power Federation show that they’re just beginning to hit their stride. This is such an awesome, wildly enjoyable record I’d urge you to check it out. 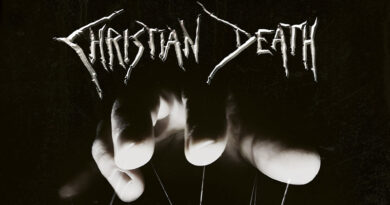