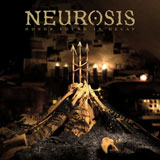 Steve Von Til was quoted recently as saying, ‘Stagnation is death’ and this is a tenement that Oakland based avant garde masters Neurosis have held dear for the last 25 years. Evolving from the hardcore scene of the mid eighties they stand proud in 2012 having pushed the boundaries, not only of the genre, but of music itself – experimenting with ambient, electronic, folk and of course mind blowingly heavy music.

As such the weight of expectation on the band is always incredible, yet alone after the five long years since 2007’s Given To The Rising and as such there are millions lining up to covert or condemn in equal measure. For those hoping for a return to the sledgehammer days of Enemy of the Sun or Through Silver In Blood there will no doubt be disappointment upon hearing that the band have thrown themselves further down the rabbit hole of recent years and made an album heavy on atmospherics rather than monolithic riffs. However this is no soft touch; rather than the blunt force trauma of the past, the band have sharpened their sonic weapons to a surgical degree.

If anything the stripped back beginnings to Honor Found In Decay makes the journey even more intense. We Rage In Gold’s lush melodies allows Von Til’s voice to take centre stage as soul searching, emotional lyrics are spat by the vocalists trademark sandpaper caressed throat. Not just on this track but on the whole album there are some of the most lyrically incisive and intense work that they have produced with themes of decay and questions raised about our place in the scheme of a world that seems to be crumbling. Yet despite these downbeat motifs there is a sense of hope and also some of the most uplifting pieces the band have committed to album, but they have to be worked for and mined from their bleak surroundings.

The down paced soundscapes continue with At The Well as the band flex their creative muscles and each passing track adds layers of density and instrumentalisation, the sound mutating from almost whimsical folk to throbbing doom.

As the album progresses the outside influences of both Von Til and Scott Kelly’s solo experimentation brings an added dimension of freedom as can be heard in the belligerent Bleeding The Pigs and the expansive My Heart For Deliverance. The tour de force comes in with All Is Found In Time with it’s dizzying array of sounds – organic and electric, digital and analogue that help shape the complex atmospherics. As muted as Honor… may sound, lovers of the crushing riff won’t go home empty handed and their patience is rewarded when the aforementioned track sees the band at their tribal and menacing best, teasing and raging as all five individuals explore the torturous twists and turns climaxing in a cacophony of noise.

Raise the Dawn ends the whole album on a towering, defiant note before fading into a calming string segment and despite it being the shortest Neurosis album for sometime (7 tracks and one hour long), it still leaves the listener exhausted but elated. Few bands scale such heights and not all bands will keep their entire fan base happy by doing so, but the band has long evolved past the point of pleasing anyone but themselves.

Honor Found In Decay is possibly one of Neurosis’ most accessible sounding records, but the scope of the music and the depth of the focus involved in creating this latest masterpiece is a fact in itself that cannot be ignored. At this point in their career it doesn’t matter what you want from them; it is a matter of if you are willing to surrender yourself to the journey.

If you do, it is phenomenal.