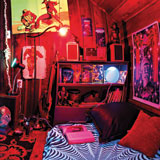 Cobras And Fire. If ever a title was a microcosm of a band then the latest album moniker from Dave Wyndorf’s New Jersey based Psychedelic/Stoner behemoths Monster Magnet is a perfect summation of their aesthetic. Over the years they have evolved from 25 minute prog dirges to bombastic and more than slightly ridiculous stadium rock to whacked out 70’s influenced rock n roll, stopping at every cliché they could possibly lay their hands on along the way.

On their last outing they took the previous studio album (2013’s Last Patrol) ‘re-imagining’ it from it’s original Stoner incarnation into an album boasting Mellotrons, strange arrangements, reworking of ideas and a woozy trip back to 1968 when acid was strong and clothes came in kaleidoscope colours. The resulting Milking The Stars turned what I originally thought was a somewhat lifeless album into a crazy vision that immediately provoked a reaction and for all it’s anachronistic madness was enjoyable to listen to.

The band, it seemed, had such a whale of a time pulling apart the source material and twisting it into different shapes that they thought they would see if they could repeat the success by delving further back into their catalogue and give 2010’s Mastermind similar treatment.

The albums itself was met with a mixed reception, as let’s face it, so has every Monster Magnet album since 1995’s Dopes To Infinity. Up to and including that album, the band could be charged with helping define and breathe life into the 90’s Stoner sound by blending psychedelic Space Rock with THC laced jams. Somewhere along the lines, after the brash commercial grab of Powertrip, the band have dwindled creatively to the point where every release since God Says No has divided the fan base, even Dave himself seemingly wants nothing to do with 2007s 4-Way Diablo and the departure of long time band member Ed Mundell feels like a huge blow.

This new trend of revisiting past albums may prove to be a good way of reviving the bands interest in themselves and sparking new creativity, but does feel that back to back, this is a little like Milking The Fans or Making Excuses To Not Write New Material but part of Wyndorfs charm is to march to the beat of his own drum. Either way, this new Monster Magnet is creative in a way that their recent critics have argued they aren’t.

Five proper tracks from Mastermind get the redux treatment and the album is rounded out with 3 mash ups from the band, a gritty cover of The Temptation’s Ball Of Confusion (which is one of the most rocking parts of the album) and one from producer Joe Barresi, the epic 9 minute I Live Behind The Paradise Machine: Evil Joe Barresi’s Magnet Mash Vol 1 which is a psychedelic head fuck featuring sitars samples.

Watch Me Fade was previously a bonus track and is now brought to the fore to kick off the album properly after the new take on Dig That Hole (now She Digs That Hole), previously a hard rock number about society’s decay which becomes a seedy, slow burning, stripped back muted affair to open. Unlike the first track, the second features the twinkling Mellotron and a triply, laid-back feel as it lifts the mood.

The title track is also slowed and twisted giving more weight to the delivery of the lyrics whilst allowing the musicians to go off in the background, duelling and noodling in a way that was lacking in the original. Whilst it misses the brash stomp, there are some great moments that are buried in a way that quietly infects your brain.

Hallucination Bomb is another seemingly stripped back number that pushes the gritty vocals to the forefront whilst the music swirls behind them. Not as effective as Watch Me Fade (maybe due to the striking clash with the original) it does feature a spaced out jam at the end, which the whole thing seems engineered to set up.

Likewise Mastermind lead single Gods And Punks becomes a soulful deconstruction which, as a favourite track of mine, seems a bit disappointing, but the whole point of this album is to take the original and turn it on its head. If you’re not willing to surrender yourself to that idea and be open to it, then parts of this album are going to be tough.

My biggest sticking point for Cobras And Fire is that last time out I found Milking The Stars to be a wild, wide eyed leap into the unknown. I was not exactly precious about the source material so it was not only a complete trip to hear Dave Wyndorf channelling The Doors and the spirit of the Love Generation, but the whole concept was left field, challenging and interesting in ways the original album wasn’t. Here the band have taken an album I consider the best Monster Magnet album since Powertrip and attempted to pull off the same trick and… well the result is hit and miss.

There is no doubt that the band have crammed more creativity into the two redux albums than they have seemingly mustered in nearly a decade and they are looking to step out of their comfort zone once again and make challenging music, but with big risks comes the chance of failure. The Titan for example is a fairly pointless but atmospheric run of piano and effects and When Planes Fall From The Sky feels completely flat.

By contrast, Milking The Stars was met with head scratching confusion as it was so out there; Cobras And Fire doesn’t go far enough and that is possibly a problem I face alone by preferring Mastermind to Last Patrol as I have seen several glowing reviews for this album from people who were unimpressed with the source material. I guess its my turn to be confused, and like the previous album, this won’t be for everyone, all I know is that the band have thrown open the door for their next album (hopefully of original material) to go literally anywhere.