When it comes to my tastes in heavy fuckin’ rock ‘n’ roll, I like it to be dirty, fat, loud, and raw. Throws some hooks into the cauldron for good measure and you’ve got a recipe for neat sounding band. Now, there’s an absolute shitload of bands who fit this bill (no complaints from me), but just like beer and tequila, you really never can have TOO MUCH. Which brings me round to Man In The Woods.

Man In The Woods are a quartet who reside on the Isle Of Man, and I suspect, as a fellow island dweller (I live on a tiny island called Australia), the brutal isolation of island life, being surrounded by water as far as the eye can see has had a major impact on the rock ‘n’ roll stylings of Man In The Woods.

Heavy, dense, and powerful for a start, the riffs oftentimes hit like waves crashing onto the beach at night on my lonely little homeland and interspersed with some quiet little moments where you can almost hear your heart beating in your chest. Square wave fuzz also plays a big factor in the sonic makeup of Man In The Woods, and how it colours their use of dynamics. The songs are made up of lumbering riffs, dirty fuzz, and bassist/vocalist nasty, gravel-rash pipes.

The songs are made up of lumbering riffs, dirty fuzz, and bassist/vocalist nasty, gravel-rash pipes…

Icarus Landing is an ode to impending doom and lays the foundations for the rest of Badlands with a gentle and liquid intro before the slugfest kicks in. Clocking in at the official ‘epic tune’ length of ten minutes, Iron Strider meanders through the first few minutes of its’ life, before they pull the trigger and roll into a tasty sounding doom outing before winding it out with some classic stoney, and road-worn sounds. Trenchfoot shows an uglier side to the band, kicked off by a pumping bassline, snarling vocals, and some soaring and almost ‘classic rock’ chord patterns.

The twin guitars of James Oxtoby and David Murray mesh like a fist in a…. glove and Christian Hardman’s drumming backs ‘em up perfectly. Coupled with Marc Vincent’s powerful tonsils and thundering bass, Man In The Woods are a tight and punchy rock ‘n’ roll unit and Badlands is, I’m hoping, just the tip of the iceberg and we’ll see similar releases from these dudes in the future. 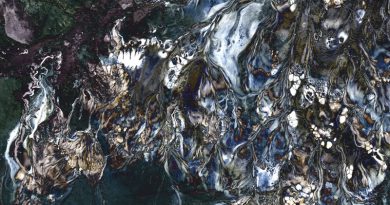