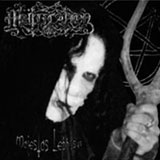 This is the 2003 edition of this French Black Metal bands ‘Majestas Leprosus’ CD. Mütiilation have been knocking around now since the early 90’s complete with a healthy discography to their name as well as being rumored to be part of the ‘Black Legions’ – The French version of the Norwegian ‘Black Mafia’.

As you have probably already gathered, Mütiilation play old school Black Metal in a very underground way. All the tracks on ‘Majestas Leprosus’ are played in a tight and twisted, fast strumming style which is nicely represented by the raw noisy production and cold, shrill vocal. This is bolstered by strong blasting drum work and numerous fills adding to the bleak sinister feel of the music.

These lads have clearly learned a thing or two about the style of music they have been playing over the years, displaying fine song writing skills along with a good ear for the sound, atmosphere and feel of their music. Anybody craving some cold, bleak, nasty underground Black Metal really should check these French maniacs out, although given their underground/limited edition attitude you’ll have to dig a little deeper to find this one, which, if old school Black Metal is your thing, is definitely worth the effort.