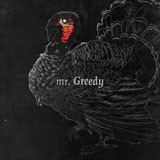 Why the fuck are there only 4 tracks on this EP. I understand it’s an EP but why taunt us with 4 songs of some of the most amazing stoner grunge my ears have come across in a long time. Mr Greedy are a four piece from Belgium with a previous EP containing sadly only one track, we now have a little more to go by.

We start off raw with ‘Fallrisk‘ the standout here being the absolute balls to the wall baseline. If there was ever a better way to entice someone in to listen to your music then I’d like to hear it. The lead singer packs a punch with some grimy gritty vocals that stand out well. It’s a track that reminds me lot of Nirvana, albeit heavier.

If your ears are happily bleeding from ‘Fallrisk‘ then you’ll appreciate ‘Space Invaders‘ which slows down the pace a little. The gritty vocals continue in a track that is reminiscent of 70s stoner rock. It loses the grungy nature of ‘Fallrisk‘ but stands up to what must be some 70s roots. It’s heavier though with the guitar packing an epic hit in places but pulling out some beautiful melodies too. It has the non-vocal drawn out sound that you’d expect in the classics, where it drops off into nothingness before coming back to kick you in the teeth and finish you off.

Third up is ‘Rock And Roll‘ the shortest track on the album. It comes and goes with softer lyrically built up sections before rocking out with harder vocals and increased madness on the guitar. It’s similarly heavy on the guitar like ‘Space Invaders‘ but there’s less heavy distortion bringing in a softer sound than previously. It ends in a similarly rock and roll fashion which is probably where the title comes from. The mixture of drums, deep baseline and the more melodic style on the guitar really pay off here, setting it aside from the previous two tracks.

Lastly, and I say that with a tear on my face because I really wish there was more to listen to. But lastly we have ‘Troubled‘. The first thing that will strike you here is the vocals, which sound distinctly different to the rest of the album, They’re way softer with what I can only describe as an Irish hint, until the chorus when the roughness pulls forth again. This track is beautiful, it packs in so many classic elements that your ears won’t know what to enjoy next. Along with the vocals, the track starts off a lot lighter than the earlier ones, a simple deep baseline and drums with some eerie sound clips floating in and out mixes well to produce an atmospheric build up to the chorus which knocks you back to the real world.

This is a great EP though, it thoroughly shows the different range of the band. It’s well produced too which is surprising for such a small production and also considering that their only other release was a 1 track EP. There are definite elements of classic 70s rock but with elements of Nirvana and early Foo Fighters. A great grunge rock piece of work, I look forward to hearing more from these guys.