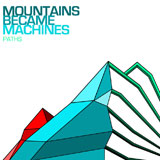 A few years back a new form of rock music emerged, rather pretentiously coined Post –rock. It was cinematic graceful music, it even dared to drop the vocals and with it the posing rock music ego. The years that followed saw it explode and what was once a refreshing left turn from the standard verse-chorus started to become over saturated. As with all genre’s this is resulting in cliché and those spiralling notes and quiet dynamics are losing their potency. And so it is with slight hesitation that I approached Mountains Became Machines. It is after all going to be very hard for any band to truly make an impact within the confines of the quiet-loud aesthetic these days.

However, aside from the usual Mogwai/Isis influences they also cite Mastodon and Baroness in there and this is evident in the 3 songs on ‘Paths’. MBM do draw heavily from Mogwai and they’re very competent at it too, however it’s the merging of this style with the polymorph metal of Mastodon that make MBM exciting. The constantly shifting riff, which seems to evolve further every couple of bars to the point that it detracts a little from the song is particularly present on opener ‘The Construct’. ‘The Search and Arrival’ closes this 3 song ep and is the bands best song, they re-visit riffs a few times and this builds it into a memorable powerful piece of music.

In all this is a very professional demo, one that will garner the band attention from the right places. The strong visuals and already well developed identity of MBM will see them well. The band have a combination of styles that given time could see them create a sound unique to them, something that is their own and that will, if they hit it, make them a name for the future.