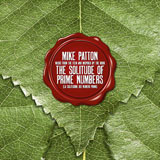 Reviewing the soundtrack to a film that you’ve not seen presents a number of problems to the objective writer. Film scores need to be approached in a different way to ‘normal’ pieces of music because they are created to evoke specific moods, utilise a wider variety of instruments and often  carry a narrative along a certain path. Sometimes the power and depth of a piece of music is indelibly tied to the images it was inspired by and some of the most iconic film scores of all time instantly bring images to mind.

Enter Mike Patton and his soundtrack to a film about prime numbers and we’re more befuddled than usual. Of course most alternative music fans will be familiar with Patton (Faith No More, Mr. Bungle, Fantomas et al), a man whose versatile voice has been lent to everything from renditions of 1950s Italian show-tunes to the infected characters in the Left 4 Dead games. But some of Patton’s more casual fans might be surprised to find out that he is also an accomplished musician and composer in his own right having scored two previous films: 2008’s orchestral A Perfect Place and 2009’s hyperactive Crank: High Voltage.

All of this suggests that it’s probably unwise to attempt to second-guess Mike Patton because some of the music on The Solitude of Prime Numbers seems to take inspiration from the jaunty-yet-melancholic film score works of Jon Brion (particularly the I Heart Huckabees and Eternal Sunshine of the Spotless Mind soundtracks) but Patton lends proceedings a dramatic, minor feel on pieces like “Radius of Convergence”. Indeed some sections of the album are quite tense and pensive, consisting mostly of sparse piano and strings, with some moody, woozy progressions sounding like the soundtrack to an unreleased David Lynch film.

Patton also introduces several recurring musical themes (“Calculus of Finite Differences” and “Abscissa”, “Twin Primes” and “Isolated Primes”) which give the collection a sense of cohesion when listened to from start to finish and which no doubt establish recurring themes within the film itself. It also suggests that Patton has become something of a sophisticated composer, recognising that familiarity and repetition can serve a purpose beyond pushing the listener. However the fact that this soundtrack was made by Patton is ultimately quite irrelevant – even ardent fans of Patton’s work might not be able to tell that he had made this record if they listened to it blind, so to speak.

And therefore there is little point dissecting it with Patton in mind – it’s a thoughtfully made, if slightly dull soundtrack which will probably be of little interest to anyone who isn’t a hardcore Patton fan, or a fan of the film. There are no conventional ‘songs’ here for you to get your teeth into and the music isn’t quite compelling enough that you’ll want to blast it for its instrumental qualities. Final track “Weight of Consequences” summarises the album’s extremes, beginning with a lengthy ambient section before closing the album as it started with a light, breathy section with Patton singing “la la la la” over shifting minor and major chord progressions.

It came as a bit of a surprise when I finally got round to watching the film’s trailer that the music was more compelling than the film appeared to be. From the title I assumed the movie was some art-house film or a maths documentary but it comes across like a tarted-up romance and so it’s hard to reconcile the two forms. Perhaps this is one of those cases where the film and the score are better off left to their own devices. Given that the film is about isolation and solitude, this is a strangely fitting arrangement.