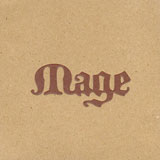 Anyone remember Outburst? Hailing from Leicester they spent many years grafting away and building up a grass roots following with some very credible stoner doom stylings but over time they seemed to run out of steam. Not wanting to rest on their laurels guitarist Ben and drummer Andy have fired the coals on a new machine and Mage has been born. This is far from a rehash of Outburst, however, from the off there is a far greater sense of purpose and grit.

Opener “Chariots on Fire” (nothing to do with 1920’s athletics!!!), begins with a brief bass intro before thee mightee riffe pins you against the back wall. Mage are clearly out to kill and the guitars are set to crack ribs at 60 paces. Vocalist Tom possesses a tough edge to his voice yet retains ample clarity to allow his melodic sense to come to the fore. This track rolls along on a powerful groove, hitting the gas for the larger than life sing along chorus refrain. If Mage are able to maintain this high level of song writing skill and catchiness things bode well. Mention also has to be made regarding the production. Recorded in just one day this truly puts a lot of bigger budget releases to shame with its truly weighty mix allowing the guitars to come to the fore without sacrificing the grunt of the bass and the propulsive push of the drums.

“Legacy” offers up some prime doom with Tom’s vocals again working around the riff with a clear sense of melody. Mage are by no means a two trick pony as they kick into some killer 80’s thrash to take the tune to its climax. It’s on the next track, “Respite” that Mage throw all their eggs into the basket as we’re taken on a journey from epic doom to a righteously rocking stoner verse and back again. Finally we are hit with the rolling “To The Edge” which piles the groove on thick and syrupy with a lyrical remake of Motorhead’s “Iron Horse/Born To Lose”.

At four fairly short tracks this is a brief taster of what Mage are capable of but it’s just about enough to whet the appetite and leave you wanting a lot more. From the cover to the production to the tunes this is an impressive package…the UK can proudly add another killer stoner/doom band to its growing list, definitely ones to keep a very keen eye on.

Edit: Ben has just informed us that’s it’s now available to purchase via Witch Hunter Records for £3 at http://witchhunterrecords.bigcartel.com/product/mage-s-t-ep.