Labasheeda are a quartet from Amsterdam and Haarlem and feature Saskia van der Giessen (vocals, guitar, violin), Arne Wolfswinkel (guitar) and Renato Cannavacciuolo (bass). The band have undergone a line-up change of late, with Jan Tromp taking over on drums, but for the purposes of recording, Status Seeker, their first album since 2015’s Changing Lights, Edwin Slothouber (Tracks 1-6) and Luca Fiandri (tracks 7-12) have stepped in to help out. The artwork features, what I assume to be a rooster who, from what I’ve read ruthlessly fight one another to garner top dog status, leading to an improved chance of reproductive success. Seeing as science and nature were my worst subjects at pub quizzes, I wouldn’t be surprised if the veracity of my research were called into question.

The album starts with Dark Dream, a sprightly opener that recalls Sonic Youth (Saskia’s vocals resembling those of Kim Gordon), at their more condensed and less experimental, two and a half minutes of effective vintage 90s alt-rock. Not the worst way to start an album. Next up is Reunion, an appropriate title considering the five years that have passed since the band released any material. This is slightly more disjointed than its predecessor and as with Light Screamer’s Reap who I reviewed recently for The Shaman, has a Riot Grrl influence in the vein of Sleater Kinney.

There is a quiet/loud Pixies dynamic to Interruption, reminding me of that band’s Wave Of Mutilation or even the Kim Deal fronted Gigantic. Elusive Girl is a mellower low key, lo-fi affair that one would expect to hear from Lou Barlow’s Sebadoh. It makes for a nice change of pace from the punchier tracks we’ve had so far. Saskia comes in with some nice violin that works effectively alongside the pretty raging punk/post-hardcore on False Flag. As with a band like Therapy? it’s a track that packs a punch but isn’t afraid to be melodic either, the standout on the album by far in my estimation. We’re then met with another Sonic Youth flavoured tune by the name of Crossing Lines, which on first listen you’d be convince you were listening to a B-Side off of Daydream Nation. Thus reminding you of how awesome indie rock used to be; passionate, noisy and with a clear DIY ethos that many bands in the genre now could do with taking a note of.

The album starts with Dark Dream, a sprightly opener that recalls Sonic Youth… two and a half minutes of effective vintage 90s alt-rock…

There is an angularity to the sound which is particularly highlighted by the track Clouds recalling Fugazi during their heyday and much like the post-hardcore legends, Labsheeda don’t forget to rock either. No Guarantees intonates some Slint style post-rock, a slow and relatively more progressive vibe to the track, showcasing the band’s diverse influences. The Adversary borrows a little from PJ Harvey’s punk blues (early-mid 90’s) while Uncomfortable Objects features some pretty nice cello from Bas van Waard. Penultimate number Infralight shows off the band’s post-punk tendencies with rumbling bass and spiky riffing. A Novelty is a one and a half minute breezy out and out punk tune ala Kristin Hersh’s 50 Ft Wave project, particularly the track Clara Bow that ends the album on a bang.

It’s hard to believe that this is the band’s ninth studio recording to date and what they’ve offered us this time round are twelve tracks of solid and unpretentious post-hardcore/alt-rock. It isn’t an album that reinvents the wheel, nor will it change your life, but there is enough diversity and energy to hold your attention. It makes for an enjoyable listen and fans of 90s indie will become misty eyed with nostalgia. 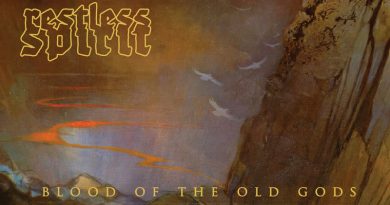