Unless you have been living in a parallel universe it is hard to ignore what is happening in the world right now. When I first volunteered to review the third album from New Haven, Connecticut stoner/sludge/rock and roll stalwarts Lord Fowl, I could go to the pub, see friends and turn in my usual work/home life with the kids balance.

Now as I sit down to write my musings on their latest release on Small Stone Records, a quarter of the world is in lockdown, my team are furloughed in fear of their future, and I’m working remotely with only my kids for human contact.

Why would I pen such a cheerful introduction you say? Well it is because music in its best form is an emotional experience, an escape, an uplift and it is at times like these that we need bands like Lord Fowl.

Since debuting their first full length album, Endless Dynamite, in 2008 the band have remained dedicated to their mission to bring the world high tempo, up beat rock and roll played the way it used to be – unashamed, unabashed, loud and in your face.

Blending stoner, doom, blues, metal and sludge in a psychedelic soup of 70’s vintage American hard rock inspired blue collar music for the every man, they don’t aspire to do anything but deliver a good time.

For the unfamiliar you can hear glorious sounds of elements that have existed on the radio back when rock and roll was cool, big chunky and catchy riffs, lashings of melody and hooks that can be sung even when you’re listening to a song for the first time.

Fire Discipline showcases this immediately, riding in on a glorious 70s hard rock funk style, all head nodding, hip shaking groove like Grand Funk Railroad, Led Zeppelin and Lynyrd Skynrd had a three way and produced a tight legged, flared trousered love child. Even the isolated bass rumbling middle section just reeks of lava lamps and garish colours colliding as you close your eyes and listen to the guitars of Vechel Jaynes and Mike Pellegrino bounce off each other.

The title track, Glorious Babylon, continues in the same vein and brings in an even catchier chorus before Get Lost introduces a grungier, darker feel to the proceedings with downbeat riffing. Recalling some of Alice In Chains more melodic moments while Janyes and Pellegrino harmonise in a mournful, but beautiful synchronicity.

big chunky and catchy riffs, lashings of melody and hooks that can be sung even when you’re listening to a song for the first time…

This marks a slight change in vibe on the album and it becomes more of a serious affair with Deep Empty’s sombre spoken word dynamic. Built around meandering guitar work and understated melody, until the track explodes into fret pyrotechnics and tumbling drums curtesy of the now departed Michael Petrucci.

The Wraith explores their doomier side with Ozzy/Bret Campbell style vocals as the band open the space between the jerking guitar riffs with huge ringing notes allowing the bass work of Jon Conine to dominate, whilst the other members dip in an out to add their flourishes.

Those fearing for the party vibe needn’t be concerned by the dip though, as In Search Of brashly wipes that away as the second half of the album is back on track with the bouncing boogie, multi-choir choruses and chunky riffs. A prime example being Epitaph’s almost celebratory ‘Tell me how long the trains been gone’ refrain, that could have been written by Ronnie Van Zant himself, as the crawling closer of Space Jockey, built around lush guitars and delicate subtle song writing.

Clocking in at a mere 37 minutes in length, Glorious Babylon is here and gone in what feels like a flash, however there is a lot to get your ears around in terms of miles covered. At the start of the review I said that music like this was vital, and not just in these interesting times, but always. This is a party album, this is a moody album, this is an introspective album – sometimes with the space of minutes – but most importantly this is an album with urgency and energy.

The production duties were handled in house by Conine and with such intimate knowledge, he’s able to tap into the heart of the band and translated it in a taut, vibrant sound that has no fat on it and as such, you arrive the end of the album sooner than expected, but has you reaching for the play button again and again, which is clearly a good thing.

The latest addition to their back catalogue is a worthy one and anyone who likes old school rock, be it the bombast of Queen, the punk influence of early Iron Maiden, the drive of Thin Lizzy or the fuzz of Fu Manchu, can find something to mine from this.

And also fans of vinyl should definitely check out the Deluxe Gatefold limited offerings over two choices of colour.

As they say, glorious. 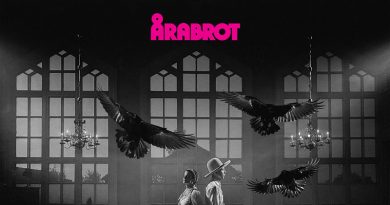