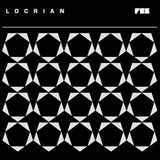 Ever the wilful perverts of sound, on this seven inch single from Flingco Sound – the label behind the ‘Black Box’ hand-held sound box and home to Black Metal mentalists WRNLRD – Locrian gut the ornately brittle eastern pulse of Popol Vuh’s ‘Dort Ist Der Weg’, from their ‘Letzte Tage Letzte Nachte’ album, burning the flesh from off of its bones and refashioning the twitching remains in their own dreadful image.

This scorched earth policy results in a remade/remodelled song that replaces the gently psychedelic somewhat pastoral krautrock of the original with a blasted, skeletal ghost. The bare-bones bass and acidic scrub of guitar recall Joy Division at their starkest, and occasional flourishes bring to mind the subtly corrosive guitar of early Thorns. Deep in the background are the ghost of a synth and buried cooing vocals of indeterminate sex.

The rhythm is a metronomic, sluggish pounding that sounds and feels as though the drums are fighting their way through dead air. Forgoing the pastoral excesses of the latter part of the original track, Locrian choose to simply allow it to degrade and collapse under the weight of those brittle guitars and swathes of electronic noise. Where there was harmony, there is now unease, where there was fragility there is now only decay.

On the reverse, ‘Frozen In Ash’ is exactly that – the solidified sound of being frozen in ash. A freezing swarm of guitar becomes overwhelmed by an echoing, haunting piano, a strummed acoustic guitar and a gradually building drum-roll, creeping insidiously toward total oblivion. The only vocals are a series of distant bloodcurdling screams. Chilling, gripping stuff.

Once again Locrian prove themselves masters of the ability to effortlessly build and maintain a sustained atmosphere of dread, and to always maintain individuality and a sense of self, no matter where the sound came from or leads to. At this point it seems to me that Locrian really can do no wrong.