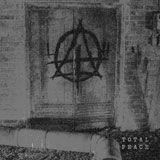 ‘Total Peace’ is the debut long player from Finland’s Loath. They hail from the crustier end of the grindcore spectrum. Nasty, nasty stuff not to everyone’s liking, but a perfect soundtrack for Special Brew fuelled misanthropic barking at passers-by in concrete shopping centres. That’s how I like to spend my weekends so I’d rate this above average!

‘Humanity’ kicks of with an evil drone that fades into grinding sludge complete with belligerent hoarse vocals that eventually blend into hysterical sampled voices. Unsettling.

The next track ‘Masochist Karma’ pumps up the tempo with some jackhammer snares, this gets really intense and makes me think I’d definitely like to see these guys live. Nothing short of total pit carnage with tunes like this. ‘Psychic Leech’ continues to up the pace with rattling snares driving the tune faster and faster until you end getting pummelled by a double kicker like ‘Overkill’.

The pace drops back down with ‘Irstas Ääretön Tyhjyys’ which comes crawling in like a swamp monster, creeping towards you, all festering riff and sharp of teeth before it snaps forward and grabs you in it’s jaws and shakes you around like a ragdoll. ‘Sect’ features more creepy, disembodied vocal samples, possibly dialogue from a movie, but I cant place it. It doesn’t matter, the gist of it is baleful and misanthropic, it’s well constructed and works with the track. This kind of sample montage is easy to get wrong and often it relies on the listener getting the reference point. Loath seem to be able to use this technique capably and the content and sound work well together.

‘Shortcut To Heavenly’ is full on raging crust punk, a burst of dirty fury. Again I’d love to see things kicking off to this live. ‘Xeroxed’ is more of the same, maybe less catchy, but still intense. Loath remind me of fellow Finns Diskelma and their metallic blackened crust.

‘The Common God’ is a sludgey downtuned dirge, featuring more sampled dialogue, again, this has been well done. It creeps in and it reminds me of the Butthole Surfers of all people – ‘22 Going On 23’. And that in my eyes is high praise chaps! ‘Slaves Mouth’ returns to a frantic headbanging pace with some intense heavy riffing throughout.

The album finishes on ‘Live Through Me’ which sneaks in on a melancholy, atmospheric intro before they proudly reveal their Sabbath hearts on their sleeves all rolling around the kit like a free jazz speedfreak and lumbering Tony riffs.

I enjoyed this album, I can imagine the crust/grind influences are maybe not to everyone’s taste, but I’d really like to see the band live. Certainly I think there would be some pretty frantic/slow, stop/start pit action going on and plenty for fans of blackened crust to get into.