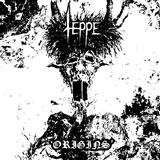 ‘Origins’ is the debut EP from Bristol riff manglers Leppe. They take their name from an Irish castle that is steeped in stories of bloody murder and occult practices, which should give you an idea of what this’ll sounds like. ‘Origins’ is a collaboration between the forces of black, doom and grindcore, mixed with a liberal dose of bile and hatred.

Opener ‘Hate’ is thirty six seconds of squalling feedback and throat wrenching screams. It sets the tone for what is to come. ‘The Bloody Chapel’ is a churning, riff powered track, underpinned by a rumbling battery of drums. Drenched in a suitably dark and savage vocal delivery, it brings to mind some brutal, atonal d-beat with added drum power. Frankly, it’s a belter of a track. ‘Gnaw The Goat’ is another rager that descends into a slightly uncomfortable riff before racing off again.

There is an element of danger with Leppe; a feeling that you can’t quite shake. The band are ready to jerk in all directions, be it layering howling feedback over thick, chugging riffs as in the close of ‘Gnaw The Goat’, or the more straightforward intro to ‘Elemental’ with its Neanderthal chug. This unpredictability gives you the pleasure of nodding your head to their slower, head caving riffs, all the while expecting a sudden change of direction. When it finally kicks in, you’re ready for it in all its crusty, d-beat glory.

‘Elemental’ may be the best track on this EP, but crushing closer ‘Voices Of The Oubliette’ is damn close. Eschewing the previous tracks’ penchant for full throttle grind riffs, ‘Voices Of The Oubliette’ throws in massive doom riffs, an unstoppable wave of heavy. It becomes almost hypnotic, with the raw ‘we are the voices of the oubliette’ refrain burrowing under your skin. Of course, this ponderous thunder doesn’t last too long before we’re treated to yet another cracking speedy riff. Leppe excel at this kind of riff; a churning gallop with a solid battery of drumming underneath it.

‘Origins’ is merely a taste of what this band could do with a full length release. As long as they keep to their current formula, I could see Leppe releasing something rather special in the future. As it is, ‘Origins’ is more than worth the £4 from their Bandcamp. Support this hateful, thunderous mob, because they’ve made a scorcher here.