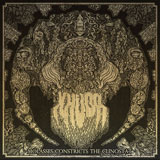 Khuda are a guitar and drum duo, originally from Leeds, now separated by a thousand miles or so with one member (drummer Steve Myles) still in the UK and the other (guitarist Tom Brooke) living in Finland. Brooke uses a Boss RC-20 Loop Station pedal to layer riff upon riff, phrase upon phrase which, coupled with Myles’ often agitated, always focused rhythms, gives Khuda’s music an impressive sound which is far bigger, but also more nuanced than that managed  by many “full” bands. ‘Molasses Constricts The Clinostat’ is the duo’s third full-length album, following on from 2010’s ‘Palingenesia’ and 2011’s ‘Iecava’(previously reviewed here). ‘Molasses…’ is six tracks – thirty-seven-ish minutes — of sharp but very listenable emotionally charged instrumental post-rock/post-metal.

‘Balduinius 149’ opens with a clean, choppy riff which becomes the off-beat backing for a chunkier guitar part, a lead soaring high overhead. With its layering and switching out of parts, its affecting twists and turns which snowball to a forceful and frenetic conclusion, this opener tells you all you need to know about Khuda’s dexterity and comes across as a kind of introduction/mission statement for the rest of the record.

‘Phi Am’ s three note guitar intro loop gives Myles room to flex his restless skills more perceptibly before locking things down nice and tight. This track is more of a straight forward build-up than its predecessor but while things might go more or less as you expect they will it’s all in the anticipation, and of course the execution. There are plenty of bands that would drag these same parts out into a fifteen minute epic but instead we get a kind of compressed master class in what could be done. The changing beats shift the mood just as much as the melody does, creating something frenetic yet still multifaceted – something with depth.

A picky, ticky-tocky riff forms the backbone of ‘Raekoja Plats’ first movement, counterbalanced by slamming bass drum and snare. As things progress there’s a discernible Russian Circles vibe but Khuda dig deeper – Brooke’s sound becoming truly, truly massive. Even in its heaviest moments however, ‘Raekoja Plats’ retains an emotional resonance – there’s more to this than mere head-down chugging, there’s a strong sense of narrative, of a story just beneath the surface.

Wide-panned toms and military snare-rolls backed by layers of toned feedback create a taught and brooding opening for ‘Beside Form, Beside Shape’. The suspense builds and builds, before Khuda break out the big, big riffs once again.

‘Madzag (I Blunder)’ comes in like a lost Quicksand demo before both players launch into a frenzied rendition of the same riff. Again the track becomes an exercise in expectancy; a second-counting grunt-riff repeated over and over, sonic textures building up around it, high-hats chatteringly busy over a solid bass and snare framework before blast beats and hyperactive picking take things to another level.

The star of ‘Molasses…’is ‘Onward Planarian’. Where the first track was choppy take no prisoners intro to all that Khuda have to offer, this last one is a more straight forward and  optimistic sounding piece from a band who have well and truly proved themselves. The dreamy delayed tones of the opening break into passages that manage to sound melancholic and triumphant at the same time – what used to be called Emo before that became a word for twatty kids with sideways hair. There’s an ominous and lengthy build up in the midsection where it seems unclear whether things are going to blow up massively or just peter out deliberately unresolved. When the next big riff kicks in it does so with absolute elation – things have gone just how they should. The building continues of course; the final chord rings out with an unspoken promise of things to come, the drums play out like Myles is already poised to start on the next song.

‘Molasses Constricts The Clinostat’ will be released on Vinyl on June 9th 2014 by Pruegelprinz Records (pre-order via Khuda’s Big Cartel Store here) and you can also read an recent interview here.