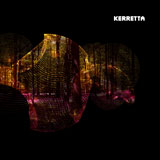 ‘Difficult Second Album’ syndrome can be a real bitch – Do you follow the same formula? Is this the right time to make a stylistic departure? Does anyone care? – but New Zealand-based space cadet instrumental trio Kerretta have navigated its treacherous waters with aplomb.

Saansilo takes the sound of their debut, Vilayer, refines it and filters it through expanded instrumentation to make something that has the same feel but contains a wider tonal palette and expanded dynamic range. In other words, they’ve pimped their ride.

On opener ‘A Ways To Uprise’ a powerful bass thump provides the spine to a near-glam rock stomp as guitar and bleeping, blooping synth entwine to flesh out the pounding rhythmic skeleton, and on second track ‘Halls To Wherever’ this same prominent bass and entwined guitar/synth combination alternately drives and snakes its way through a skipping, jittery rhythm that moves from brittle guitar filigree, through Fripp/Holdsworth-esque tones into a synth-topped piledriver end section.

‘Bloodlines’ takes a bouncing techno rhythm and synchs it to an insistent distorted clipped fuzz-tone, allowing the bass to take the helm as it moves from an uncanny organ impersonation to a funky fuzztone, all the while layering percussion atop the whole kaboodle that just adds the icing to a seriously groovy li’l cake. This one has definite shades of Liquid Liquid, minus the minimalism.

‘By The Throats’ builds tension gradually, starting with twinkling guitar atop thick bass stabs and dramatic drums, bringing in staccato guitar and amping up the tension until the whole thing explodes into a snarling molten rock and wah-abuse meltdown.

‘Shepherds Thread’ is built around an ever-so-slightly off-kilter beat and incrementally sliding synth-tones, with post-punk guitar morphing into slash-and-burn rock monster moves as the track progresses, and ‘Kept From The Brilliance of The Outer World’ is a moody slow-burning builder that shifts from dreamlike ambience into paranoid razor-wire guitar and back again over its course.

Final track ‘Onyxia’ proceeds from plangent lambency into tense, terse action then out into seriously warped-under-heavy-gravity space doom as though it’s the most natural thing in the world. These boys have got ‘dynamics’ well and truly NAILED.

Kerretta are worlds apart from the bog-standard ‘quiet-LOUD-quiet’ post-rock outfits choking up the marketplace, THESE three guys know how to make a song gripping and listenable without a vocal presence and they know how to grab your attention and hold it. To them, it seems to come so naturally.  So chalk Saansilo up as a victory for the Kiwi trio over ‘difficult second album’ and get comfortable for ‘em to smash ‘third album hump’ out of the park too. Kerretta are going all the way to the top…and then a little further out.