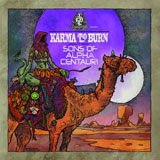 Since 2010 West Virginian’s hard hitting, stoner instrumental band Karma To Burn have collaborated with Swale, Kent’s experimental instrumentalists Sons Of Alpha Centauri to release a series of cooler than a polar bear in a freezer Split EP releases, showing that some times all you need to deliver a stone cold tune is the vision to go and rock out.

The net result of this was the first 7″ five years ago, it’s follow up last year and now finally the concluding part of the limited, collectors trilogy that comes in celebration and hot on the heels of Karma To Burn‘s appearance at the recent Desertfest.

Both artists deliver one song each – Karma To Burn re-imagine the concluding track from their Self-Titled debut, previously featuring a spoken word passage, here they strip Six down to its brass tacks and let it talk for itself.

The track builds on a moody, introspective opening and powerful drum tattoo that breaks into a trademark wall of thick, rich guitar. The production on this take is fantastic and all three instruments are defined and play their part as they bounce off each other in a way that only the three members know how.

The moody atmosphere can’t stop the band developing a tight grove that is accented by the high end of the guitar which adds voice to the music. As always with Karma To Burn, it features slamming dynamics and a gritty bounce that gets you nodding your head; it may not be as defined an instrumental track as their more recent output like Arch Stanton but by the time Six comes to a stop you will be wishing it had gone on for longer.

By contrast Sons Of Alpha Centauri usually offer a mellower, psychedelic vibe that counter points the full force of their co-conspirators; their contribution is often as calm as the blue themed part of the sleeve in comparison to the juxtaposed violent red imagery on the flip side.

Here 66 (do you see what they did there? Six/66?) is an outing for the sharper, more abrasive side of the usually laid-back UK psychedelic rockers as the initial, intricate guitar gives way to a hard, punching rhythm.

The ascending guitar runs and sharp sounds tell an urgent story than is more sinister and more like Karma To Burn than what they have defined themselves by in recent years. Having completed this trilogy, which is in itself part of a six edition vinyl run they have put out, the band are talking of moving from ‘Phase I’ to ‘Phase II’. Whatever that means, they have shown themselves here to be able to go toe to toe with one of the best bands of their type and match them blow for blow.

As a limited vinyl run, the physical release is extremely collectable despite the short running time (Karma To Burn clock in at 3.49 and Sons Of Alpha Centauri 5.33) but as ever with these collaborations, the idea is to open your mind to something different and give you a taste of what each unique band has to offer.

Where Sons Of Alpha Centauri go next is anyone’s guess and Karma To Burn will be ripping up a road near you again soon enough. 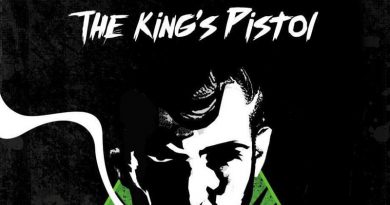