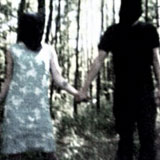 Whether or not the liner notes that accompany Nadir are just another case of self-mythologising from the nomadic Jucifer front-woman Gazelle Amber Valentine, they paint a charming picture of a young band, destitute of anything but the pleasure of playing music among the junkies and vagrants of a run-down part of the city at a time before they had turned into the cult legends they are now. These self-recorded songs reflect the story beautifully; they are stripped to the absolute essentials – a guitar, drums, vocals, cigarettes and a chocolate sauce and whiskey concoction the guys liked to call ‘mud.’

As such the songs have a raw power, comparable to early White Stripes in the sense that these guys clearly felt like outsiders finding solace in one another and the music they created together. Kicking things off in a dynamic (and downright bad-arse) fashion is opening track ‘Prime’ which contains a huge, lumbering riff and a haunting vocal melody – a long lost sludge classic. ‘Hachimantaro’ takes a slightly more relaxed approach but is equally heavy and features a similarly lurching riff. In contrast ‘Glamourpuss’ has an  industrial sound, akin (surprisingly) to Nine Inch Nails crossed with some Babes In Toyland (think ‘Bruise Violet’.)

If nothing else, Nadir illustrates that the duo have always had a great musical chemistry, even if some of the songs feel like they could implode at any moment. Indeed ‘Withering’ seems designed to give this impression – the drums and guitar slowing up and down as if the recording was transferred from a warped cassette. Add into the mix Gazelle’s otherworldly voice and the song feels like it’s an elephant teetering on a little ball.

Considering the songs come from such humble lo-fi beginnings, these recordings have been given considerable muscle by Chris J. Black and Scott Hull who transferred the analogue tapes to digital, mixed and mastered the album respectively. Sadly the vocal levels are quite low on all of the tracks; whether this is by design or due to the limitations of the source material is unclear but it’s a shame because Gazelle’s vocals play a big part in Jucifer’s appeal (just listen to L’ Autrichienne to hear how versatile a singer she is). However these songs do illustrate that she has always taken an interesting approach to fronting a sludge band, her vocals generally melodic throughout these five songs – almost Kim Gordon-like on ‘Glamourpuss’ and donning a ghostly warble on ‘Withering’ and uncompromising doomy-closer ‘Crossless.’ This whisper-style of singing was apparently created so as not to disturb her parents at home – if only they’d heard their daughter’s voice in context…

So overall this is a gem of a release – a reissue of a tape they’d send out to promoters to try and get shows back in the early to mid nineties. Whether they knew it or not back then, it’s clear listening to Nadir that these guys had something that would set them apart and make them legends. In many ways Jucifer are still outsiders but Nadir is an interesting origin story.