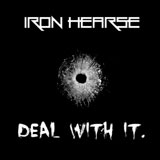 Sometimes, production (or even a lack thereof as many of today’s rout of retro-orientated bands prefer) don’t mean shit. Sometimes it’s just about a group of dudes getting in a room and absolutely smashing it for a few hours until the record is done. No messing. No overdubs. No second chances. Pro-Tools? What the fuck is Pro-Tools? Deal With It.

This is exactly what Iron Hearse have been doing for the best part of thirteen years together and in the process have almost single-handedly paved the way for “Swindon Doom” to spread it’s evil wings. Last year’s mighty cut, the stupendously-titled ‘Get In the Hearse‘ wasn’t the most polished CD to ever hit your speaker cones, but the songs, the riffs and the sheer energetic feel of this metal-bound death wagon was enough to rock your ‎genitalia right Into orbit. Once again helmed by lofty vocalist/guitarist supremeo Grant Powell and ably backed by the lycra-tight rhythm section of The Khan (bass) and Kevin Sibley (drums) the ‘Hearse are back and ready to show you who’s boss with eight (nine if you buy the CD) tracks of broodin’ n’ groovin’ hard rock. Deal With It.

I must admit, the partial switch in styles to a faster, punkier style on several of the new tracks took me by surprise. ‘Get In the Hearse‘s standout moments came from doomier long-players like ‘A Slow And Heavy Rid ‘, ‘The Ultimate Atomic Man‘ and ‘Vessel of Astaroth‘‎, so the fact that ‘Deal With It‘ immediately kicks off with a snot-nosed, breakneck 45-second title track and is punctuated by the likes of the bikers-on-meth thriller ‘Dragged Off By the Satanic Cops‘ and the hyperdrive clunk of ‘ ‘Archimedes Death Ray‘ is certainly an unexpected twist. The title track itself blitzes by like Charger attempting a Black Flag cover and neatly segues into the joyously metallic ‘Cydonia Quest‘ which acts as a stop-gap between the bouncy aggression of Winnebago Deal and the fading, sparkling true metal of the likes of Hour Of 13 or The Gates of Slumber. That’s right, Deal With It.

‘City of Vanishing Spires‘ and ‘They Beckon From Below‘ capture the doomier side of Iron Hearse‘s balls-out approach. As Grant’s liquid riffs and matter-of-fact lyrics barrel across your rear-view on the latter it’s as if you’re riding a Harley across the open plains, hair in your face, booze at your lips and the sun at your back. Except that you’re not, you’re much more likely to be just out shopping at Merry Hill and quietly head-banging alone like a loon. Oh well, Deal With It.

The punkier moments aside it’s clear the The Khan and Sibley have picked up ‎their act even more since ‘Get In The Hearse‘. Sibley’s warlord drumming oozes perfectly into The Khan’s basslines which put the gas in the tank at the summit of the likes of the Judas Priest-ly ‘They Beckon From Below‘ and the colossal final cut ‘Evil On Your Mind‘. Coupled with Grant’s renegade guitar-shovelling, this closer is a song that simply begs to be listened to over and over again. Ready? Deal With It.

The album, CD-version at least, finishes with a cover of ‘Burning Love‘. Yes, the cheesy Elvis classic is dusted off and given a heavy metal-spanking ‘Hearse-style and guess what? It actually works. Grant manages to just about pull off the vocals with a stifled rockabilly slant and the riff chugs away solidly like The Ramones having an End of the World party with Reel Big Fish. It’s that good – Deal With It.

With its all-too-basic black cover penetrated by a single, simple gunshot through the centre, Iron Hearse have, in just 6 hours of studio time, once again crafted ‎an unassuming, yet indulgently heavy metal treat. Showing no signs of slowing down, the power trio have the licks, the beats, the sense of humour and the live show quality to be much more accomplished than they actually have been to date. This is a slice of fun that’ll cheer you up on a grey day and bang your head on a sunny one. So what are you waiting for; get out there and Deal With It.