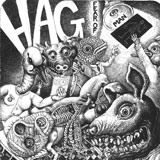 As far as any of us can remember, there’s been a two-tier hierarchy in progressive sludge metal: Tier 1 – High On Fire, Tier 2 – everyone else. Underrated heroes Teeth Of The Hydra tried to scale that never-ending beanstalk to Tier 1 heaven but fell annoyingly short with 2006’s inconsistently stellar Greenland (Tee Pee Records), never quite beating Matt Pike and the boys at their game – meanwhile, London UK’s HAG – Tamas Kiss (drums, also of Bad Guys), Robin Freeman (bass), and Ian Baigent (vox/guitars, also of Mountain Pete) have been waiting to strike, biding their time drinking and riding on the fumes of a pretty lethal self titled EP released back in 2010.

But if you’re like me, that gem of an EP came and went without notice. It soared so far under my radar that I’m just now realizing the unforgivable error of my ways. Shit, I had five plus years to get my act together and I’m still late…And 2016’s Fear Of Man, the band’s long awaited full length debut (DNAWOT Records), is a great, albeit ruthless way to bring my ass up to speed – heady, proggy, rabid and vicious; it’s the kind of ADHD riff rock only conceived by the most twisted of minds. Off kilter time signatures, quirks amplified in ultra low end lo-fi (mixing and production credits go to Scotty Hard and Tim Cedar respectively) – it’s like the quintessential musical mad scientist with competing auditory hallucinations; comedic voices ala Doug Stanhope tracked to a Melvins instrumental, all running wild like a brain eating prion disease. And if you still don’t know what that looks (or sounds) like, HAG gives you eleven tracks with eleven chances to get the message.

One look at the album’s awesome cover art (David Mitchell) and you’d think this was some throw back nod to Life Of Dreams era Crumbsuckers – Mitchell certainly nailed the crossover/punk aesthetic and does this album supreme justice – it’s a record about the stupidity of man, the primitive human instinct and ultimate survival in this world; lyrically, it’s a bit more accessible to the struggling man’s ear – urban grit for the common folk. It’s an inviting approach, and makes it easy for the band to pull you along as they steamroll through jaggedly dancing licks (Kingdom O), extended, open ended psych-solo breaks (check the 4 minute mark of Trauma Yauma) and the flat out brooding dirge (Rainbow Dust and the even darker Wrong Bar). Baigent’s untamed spoken word howls and croons cut through the mix and the Kiss-Freeman rhythm section strengthens the medley with sprinkles of High On Fire-esque skull crushing groove to get the heart pounding and the blood boiling.

It’s easy to get lost in Fear Of Man’s labyrinth; occasionally you’ll have a central riff to tether and center you amidst the madness but ironically, the band is most memorable when they’re pulling, twisting, pushing, and tugging you along at almost random. White Lion bashes, stumbles, and tugs before breaking into a cool ascending-descending chord progression. Baigent’s solo licks work very well here and through most of the album – yet another nice twist in a surprisingly pleasing slab of sludgy meat. HAG indeed tears through these tracks, turning every version of ‘hybrid sludge’ on its head, cracking it wide open in the process.

So it seems the best way to beat the Tier 1s at their own game is to create your own by defying the rules. Nicely played. 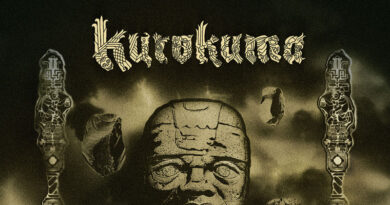