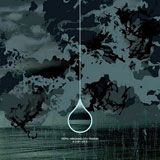 At this juncture I must admit to being much more familiar with Gary’s work than that of the Hotel Wrecking City Traders, or HWCT as they will now be known for the sake of brevity, having only heard their ‘Black Yolk’ LP in passing before. If memory serves, HWCT usual mode of expression is more along the lines of a noisier, less precise and more fuzzed-out take on early Helmet, which is no bad thing at all. Now, on this here elpee they’ve reined in their inner AmRep and gone for a more expansive palette, still fuzzed-up to the max, but one that better serves the expansive vistas of the high desert that the guitar of Gary Arce conjures up.

Although billed as an LP, we only get one ten minute song on each side, making this more of an EP really but, hey, that’s just nitpicking. No sense complaining when the goods are decent, right?

Side A gives us ‘Coventina’s Cascade’, a track that starts out with a dreamy, smeary-sounding eastern motif punctuated by staccato drums and overlaid with Mr Arce’s distant, shimmering liquid guitar lines but gradually picks up speed to become a rolling, kinetic ball of tumbling percussion and hypnotic scrunge – still with those gorgeously dreamy guitar lines snaking their way through. HWCT drummer Ben surely brings the rock here with a towering performance of responsiveness, restraint when needed and balls-out pounding when he damn well feels like it.

The track builds up mass and energy, then drops out a little to a pulsing beat and slightly less dense wall of guitar, allowing the spectral guitar to shine through for a moment…before going full-on into a pounding claustrophobic thrash that explodes into staccato punctuation once again. Once spent, everything winds down a notch into very restrained drums, subdued rhythm guitar and that gorgeous dreamy guitar snake, but not for long, as Ben starts thrashing his cymbals again and kicking the tempo along behind Arce and HWCT axeman Toby, still in low-down mode, before winding down until we are left with minimal drumming and a looping refrain of Arce’s quicksilver tone.

On the flip-side we have the more expansive ‘Traverse Of The Oxen’, a slightly more evenly-paced and wide-open number. Ben kicks the beat along nicely, Gary does his lighter-than-air ethereal guitar THING and Toby let’s rip with a guitar tone that could peel PAINT, churning and a-reeling through the space being carved out. Of course, it goes without saying that there is NO way Ben can keep his energy under his hat for too long, so it all soon flares up into one of those ‘Animal’ from The Electric Mayhem-style flailing drum crescendos, with Toby along for the ride just FLAYING his guitar until things wind back down again into more tranquil climes. Toby’s droning guitar fuzz filling the lower portion and Gary’s guitar winding through the upper airs and climbing higher until total evaporation occurs, then…….end.

Great stuff. Definitely one for fans of the fuzzier end of Psych-rock and Gary Arce’s work in general, but I do think most folks with a functioning sense of taste could dig this muchly. Thumbs up it is then!