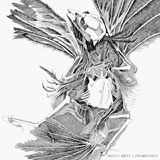 Two piece bands, one thumping the drum set and one thrashing the strings, one or both members maybe shouting or even singing over the ruckus, have become an established structure within rock music. From the ground-breaking blues-punk of the White Stripes to the seething molten fury of Black Cobra, duos have broken out the egg in the 21st century and have really come to symbolise a new aesthetic within a time-worn genre, and particularly duos who contain one male and one female of our talented yet woefully fucked-up species.

Holly Hunt take this two-piece format and apply massive volume, deft rhythm and precision riff-technology to produce a very agreeable sound that takes inspirational slivers of the droning might of legends such as Sunn O))) and Earth and hammers out a more propellant drum-centric rock that is still as turgidly down-tempo yet is faintly more accessible to those who wish to nod and sway and perhaps even tap their booted feet to the grinding sub-metal machine music that is encapsulated by this power duo.

Approximately seventeen minutes long, and composed of three meaty tracks, ‘Prometheus’ is a tasty insight into Holly Hunt’s chunky instrumental sound, particularly for those who have not heard their previous albums. ‘Meano’ (a very good title) lays down the obligatory leviathan riff that crackles with fuzz, and then the drums kick in, and I mean big fuck-off drums. Beatriz Monteavaro is a skin punisher who really seems to understand how to underpin the enormous weight of a riff; her steady time on an open hi-hat or crash cymbal is counterpointed by vicious stabs at the snare and gut-punching socks to the kick drum, broken at the end of the bar by perfectly timed slow-rolls. Bloody lovely.

‘Saturn Devours His Children’ is another medium length (three to four minutes) ear-buster that almost hangs suspended on Gavin Perry’s elegantly crushing guitar. There is more than a trace of the exhilarating dynamics of industrial icon Justin Broadrick at work here too, the darkly expansive chords that fill out the room and chime like bells, and that is no bad thing to anyone with good taste.

The last track, the nine minute title song, continues the impeccable execution of post-metal geometry that Holly Hunt carve out in their single minded quest to re-define ‘heavy’. As ‘Prometheus’ reaches its climax, Beatriz rains scattershots of machine gun snare-roll over the creaking groaning guitars, signalling the approaching end.

Recorded by Jonathan Nunez from fellow Floridians Torche (drummer Beatriz used to play in the legendary Floor), this extended play is well worth the time of anyone who prays, nodding in captivated trance, at the altar of thee hallowed riff, and almost annoyingly adds another ensemble onto my list of bands I want to hear live. ‘Prometheus’ in three words: dense, majestic, spacious. 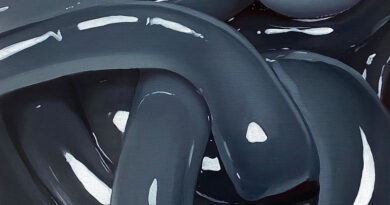 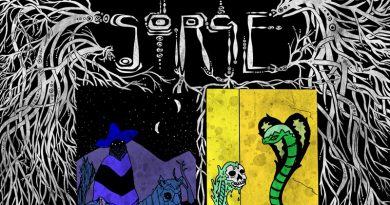