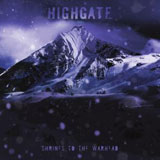 Four tracks of doomed out pure filth for your delectation, here, on the sophomore release from Kentucky-based trio Highgate. This time out it’s dirty, stinking DOOM all the way, as ‘Shrines To the Warhead’ is almost devoid of the Black metal influence that the band bore on their debut, yet that ineffable coldness is retained at the unbeating heart of their sound. There really is something monomaniacal and unsettling about the way Highgate deliver their slow-motion apocalypse.

Coming on like a harsher Warhorse or, at times, a stripped-down Unearthly Trance, Highgate are a punishing avalanche of no-frills sludge, made even more potent by it’s very economy.

After a short, spoken introductory piece entitled ‘Burning Venom Fire’, concerning the practice of ‘Taking Up Serpents’ peculiar to Pentecostal churches in Appalachia, the mudslide of sonic filth begins in earnest with the devastating ‘Holy Poisoning’ – a squalid mass of fuzzing, fizzing, depthcharging bass, violently ‘In-The-Red’ guitars, a howling feral beast and the sound of someone kicking seven kinds of shit out of a drum kit v-e-r-y slowly. A brief lull in the onslaught allows the listener to grab a lungful of fetid air before being dragged back down into the depths again as everything crashes back in even SLOWER.

The torture never really stops, despite occasional pauses dotted throughout the latter part of next track ‘Of Ruins’, as by this point you are resigned to your fate – to be crushed under the atmospheric pressure generated by Highgate – and any brief respite can only be a temporary one. Said pauses serve to create MORE tension due to the deployment of minimalist, yet nerve-jangling piano notes slowly being picked out over the final lull. Stripped of their cloak of sizzling distortion, the guitar and bass sound so cold, skeletal and inhospitable that the addition of even more skeletal piano serves only to highlight their chilling lack of warmth. Crrrrrrreepy.

The full stop at the end of Highgate’s sentence is almost literally that. ‘Warhead Rise’ is a juddering slow-mo juggernaut of muck with some of the most howlingly bestial vocals ever to grace a sludge record. It crawls through the dirt for quite some time before dragging itself up and attempting some forward motion, only to be cut down dead in its tracks. THUD.

There are no ‘grooves’ here, there is no light, only cold, filthy sludge. This is an ugly recording and a punishing listen, but it IS a worthwhile one. Just don’t expect the light at the end of the tunnel to be anything other than a freight-train heading your way.