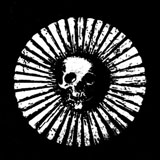 Kentucky blackened sludge behemoths Highgate give us this ‘tying up the loose ends’ compilation of demo, live and unreleased tracks as a between-albums treat, following their monstrous ‘Shrines To The Warhead’ album of last year and whatever unholy filth they plan on vomiting forth next.

Mainly comprised of six tracks from the band’s 2005 and 2006 demos – with 2006’s ‘Black Frost Fallout’ demo giving its name to the entire endeavour – there are also included a live version of the title track and another, untitled, live recording from a live CDr from back in 2008 and a previously unreleased studio track, the mysteriously entitled sound-collage ‘G.H.H’, and with the opening title track alone lasting ten minutes, that is a lot of bang for your buck.

If you’re familiar with Highgate, you’ll know what to expect – bleak, pitch-black sludge that hits like a slow-motion ton of filthy bricks and a vocalist who combines the harsh, throat-scraping corpse-shriek of Black Metal with the ‘rough as a bears arse’ growl of prime sludge – and if you’re unfamiliar with ’em, this is as good a place as any in which to start!

The 2006 demo tracks make up the first four songs here, and if I didn’t know they were ‘only’ demo tracks, I’d never guess by their quality. Hell, I’ve heard full-length albums by bigger bands that sound worse than these! The drums here, smashed and bashed by Steve Porter, sound particularly impressive, informed by a sense of spaciousness that really adds to their percussive power.

Although on the whole it’s all musical doom and gloom, during ‘Black Frost Fallout’ itself and for the main body of ‘The Wolf’, porter lashes out with a black metal style jackhammer beat that just sounds SO solid and fierce. It’s moments such as these, along with the odd ‘Black Sabbath buried under a pile of dirt’ vibe of ‘Sermon of The Apocalypse’ that really goes a long way toward making Highgate stand out from the morass (no pun intended) of uninspiring sludge bands that abound these days. Highgate sound like they’ve never owned an Eyehategod or Buzzov-en album in their lives. In fact, their closest relative, sound-wise, would be the early years of Unearthly Trance. It’s all about the coldness of the sound, you see, and these boys are sub-arctic.

Now, the 2005 demo tracks that are included, ‘Sermon Of The Apocalypse (2005 Version)’ and ‘The Sea Of Perdition’ are a little more lo-fi than those form a year later, and as you may notice, one of ’em is actually an earlier version of another track. The 2005 version of ‘Sermon Of The Apocalypse’ is a slightly different beast than the 2006 one, played as it is at a slower pace and lacking the definition that allows the Sabbath influence to shine through on the 2006 version due to the generally murky sound. As for ‘The Sea Of Perdition’, it’s a strange beast that feels more like an intro piece, but this may be down to the fact that it is listed on the tracklist as an edited version of the track. I can’t imagine what the rest of the track would sound like, but this ominous, low-key tolling riff and bass murk overlaid with a vaguely familiar vocal sample – it may be Crowley, but I can’t place it – sounds like a lead-in to something totally bleak and devastating. Shame we only get an edit.

The album is rounded out by two great sounding live recordings – ‘Untitled Second Movement’ and ‘Black Frost Fallout’ itself, once again – that do a lot to showcase the power that Highgate possess in the live arena. Raw, but not overly so, harsh, dynamic and bleak, they sound like a band that has honed their sound into a weapon with which to assault an audience. ‘Black Frost Fallout’ in particular is a whirlpool of blasted chords with a sucking bass undertow that functions very much like a black hole – drawing in all light and spewing out blasts of heavy, crushing gravity.

As I said earlier, this would be a great place to start if you’re unfamiliar with Highgate, as it gives a pretty broad sweep of their capabilities. Fan or not, this is well worth an hour of your time if you like it bleak and heavy.