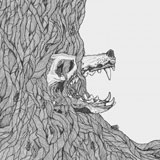 In recent years there has been a glut of material released by members of various heavy music scenes who venture forth as solo artists, taking things back to basics with intimate acoustic material. The likes of Mike Scheidt, Scott Kelly, Steve Von Till, Nate Hall and even the mighty Wino have released albums of acoustic tracks that hold just as much weight and gravitas as the genre they’re better known for.

While Harm Wülf, the alter-ego of Blacklisted frontman George Hirsch, may come from a completely different scene, his contribution with There’s Honey In The Soil So We Wait For The Till is just as heavy and just as haunting as the long list of doomed troubadours. That this album doesn’t contain the seemingly obligatory Townes Van Zandt cover is evidence enough that Harm Wülf is a vastly different proposition than most releases of this ilk.

Opening with the stripped-back strum of ‘Oldfur‘, it’s clear that Hirsch is writing from within a vastly different sphere of influence than most of his acoustic contemporaries. The cadence and flow of the music has an almost neofolk quality, while Hirsch’s voice is slightly buried in the mix. This may be a more intimate recording than his work as a hardcore frontman, but he’s still keeping his cards close to his chest here, his words just indecipherable enough to retain an air of mystery.

‘Silk Soul‘ opens with a sense of foreboding, Hirsch’s gravel-throated intonations sung low atop an almost mechanised rhythm, the driving guitar accompanied by the sparsest percussion. The harmonised vocals that back up Hirsch’s apocalyptic murmur of “We could have torched the earth” lift the track above just standard doom-and-gloom introspection, lending an air of faint hope. Perhaps it’s just coincidence that Harm Wülf sits next to Hawks And Doves in my library, but the stylistic similarities between this project and Gared O’Donnell’s own bare-bones confessionals are so readily apparent that maybe it’s not.

Without discernible vocals to hold your attention, the uninteresting two-chord structure of ‘Astral Oblivion‘ passes by without inspiring anything but a desire to skip the track. In sharp contrast, ‘When Old Becomes New‘ is one of the album’s standout tracks, a Lanegan-esque number with some beautiful yet simple guitar and more of those wonderfully world-weary vocals. By this point in the album, the mystery of Hirsch’s words demands to be unravelled, and you’ll find yourself listening intently to catch the few faintly audible phrases he occasionally lets slip.

‘More Weight‘ is an ever-building exercise in tension that incorporates a variety of elements that increase the sensation of unease; abstract percussion, atonal chords, samples, they all contribute to the eerie atmosphere of the track. The redemptive ‘Spectrum Blues’ is a lush track that features some wonderful creaking violin and slightly dissonant background sounds that I can’t quite identify. It’s the inclusion of these little touches that help to make this more than just yet another sad-guy-with-a-guitar record.

Both ‘We Hold Empty Names‘ and ‘Bonepicker‘ are a return to the guitar-and-vocals sparsity of the early tracks, Hirsch’s delivery communicating the same level of atmosphere with just these sounds as the preceding songs did using all sorts of additional textures.

Closing with the album’s title track, which begins with finger-picked guitar and the keening wail of a singing saw, it reminds me of The Black Heart Procession’s sparser output; it has that same mournful quality. The martial drums used sporadically throughout serve to both unsettle the listener and to hold them rapt, and when the track erupts in the driving rhythm of pounding drums, you’ll be utterly swept away by the drama of it all. When it all comes crashing down before returning to the opening guitar motif, and ending with a sample from Where The Wild Things Are, there’s a sense that you’ve just been told a story, that there’s an underlying theme to this album. With a few more listens, you may just put together all the pieces of the tale.

As Harm Wülf, George Hirsch has cast himself as the protagonist in a fascinating musical story, and in doing so has created an intimate record full of haunting moments that you’ll find yourself returning to again and again in an effort to reap what he has so beautifully sown. 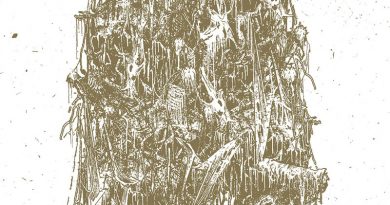