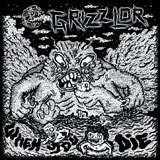 Let me tell you a little secret about me; if you tell me you play grungey noise rock, you’ve got my ear straight away. As a chap whose first foray away from mainstream music was along the lines of Nirvana, the Smashing Pumpkins and their many contemporaries and inspirations (which led me tumbling further down the rabbit hole that brings me here) I will always have a bit of a soft spot for anything that is made with the philosophy that noise, energy and destruction should be central to the creative process. So when the Shaman sends me an email telling me that a band named Grizzlor didn’t even have a press release but wanted a review I thought I’d give it a shot.

From what I can gather, Grizzlor are a three-piece noise rock band from New Haven, Connecticut, they formed in 2013 and this 7” is their third EP, and their first release on Brooklyn-based Money Fire Records. Wasting absolutely no time, appropriately titled opener No Time is a fuzz-heavy assault, combining the Jesus Lizard’s lurking menace with a lumbering bass riff and early Mudhoney guitar spasmodics in a succinct 83 seconds. Plaster Cowboy applies the same formula but adds breakneck speed to the equation to add a palpable sense of surging energy that eventually causes the song to self-destruct.

Side B slows things down with some doom-inspired riffs in Stoned and Mini Spaceship which allows Grizzlor’s low-tuned rumble to more-densely fill the airwaves. Stoned in particular is a delight of Electric Wizard style doom and weed-induced paranoia heightened by a fantastically psychotic guitar lead and Victor’s reverb-drenched vocals.

So as it turned out it was worth a punt – Grizzlor have got their sound down to a tee, and while there’s not yet a sense of their own personality coming through, you get the sense that they’re building towards something pretty great. Fans of the noisier end of the grunge spectrum will find a lot to like about this release, as will anyone who has enjoyed recent releases by Pigs, Pissed Jeans and the Great Sabatini.