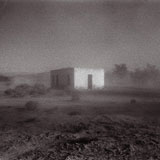 With characteristic little fanfare, Godspeed You! Black Emperor are back with album number four, an album that was announced the day they released it at a gig in Boston on the 1st October 2012, fourteen days before it’s official release date. In a time when record labels feel a need to give a release a good three month PR blitz prior to release to ensure complete saturation of the market, it’s a refreshing change of pace and a real thrill for fans of the band – a band who admittedly need no introduction or pompous self-aggrandizing. No cock-tease audio samples, no slow release, just an end product on your lap from a band who are spoken of in only the most revered terms as innovators, anarchists, and artists. Don’t fear friends, ‘Allelujah! Don’t Bend! Ascend! is exactly the kind of Godspeed album you’ve been waiting ten years to hear.

And building on the innate sense of anticipation that is carried with a new album from a cult band, Godspeed immediately kick things into a flurry with opening opus “Mladic”, a song that had been performed by the band in a slightly different form all the way back in 2003 (along with “We Drift Like Worried Fire”). Atop a bed of drone, guitars chime and whine like some demented birdsong before a backbone of rhythmic drums, piano and distortion unfurls, propelling the song into an insanely energetic and chaotic episode. High guitar notes introduce a middle-eastern-tinged melody before the bass sweeps in to double up on the melody, adding significant clout to the now all encompassing atmosphere of noise the band has created. Ten minutes into the song and you suddenly realise that you’re short of breath and the hairs on the back of your neck are standing to attention – Godspeed have always been a magnificent band, but having been largely absent for ten years you can now appreciate just how much you missed them.

As “Mladic” simmers down, “Their Helicopters Sing” comes droning in. One of the two ‘drone’ tracks on the album, it sounds like the disorientated, shell-shocked aftermath of some air-strike. It’s on this song that I became intrigued by the disarmingly serene photograph gracing the cover of the album of a isolated, white, flat-roofed building in what looks like a desert or otherwise-arid landscape. One can imagine a scene in which this enigmatic building is soon levelled by bombs and gunfire, and “Their Helicopters Sing” soundtracking the ensuing, otherworldly, slow-motion chaos.

“We Drift Like Worried Fire” begins with tense plucked strings before relaxing into a glacial, Tortoise-like groove. A lulling, repeated guitar refrain is joined by strings and slowly building layers of noise and rhythm to euphoric effect. But just when things are seeming a bit too life-affirming for comfort, the song takes a decidedly minor-key turn, you’re left with a slightly bitter taste in your mouth and you’re reminded that in Godspeed’s world there’s no such thing as black-and-white. It’s all about the broad range of emotions and mental states, and judging by the ominous strings that lead the song out, not all is hunky dory in the world of Godspeed’s imagining. Final drone track “Strung Like Lights at Thee Printemps Erable” is the slow-burn comedown to the album, an atmospheric afterglow of amps warming down and order being restored.

You honestly couldn’t have asked for a better album from Godspeed You! Black Emperor at this point in their career. So many bands return after a long hiatus for the wrong reasons and sound like shadows of their former selves because of it. But Godspeed sound like they’ve picked up right where they left off, with the same intention and the same commitment to the music above any desire for glory, sales or lucrative tours. This is exactly how to do a comeback album correctly, now let’s just hope they don’t make us wait another decade for album five. Welcome back Godspeed, oh how we’ve missed you.