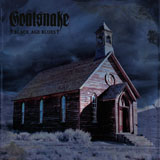 The gentle patter of rain on a tin roof, a harmonica chiming in the night, the imposing calm of a church amid a clouded woodland, sundials in the shade – some things in life are simply meant to be timeless. The humble blues itself surely falls into this category and on recent evidence, Pete Stahl’s weathered, enduring yet triumphant rasp would also come into contention. What do all of these things have in common then? Why, they all help to make up valuable components of the mighty Goatsnake’s new opus Black Age Blues of course. Apart from the sundial in the shade, I just thought that sounded cool.

So after 15 years of tinkering around with SunnO))), Burning Witch, Wool, Earthlings?, The Obsessed, Thorrs Hammer and no doubt a couple more side projects alongside regular life, it’s great to see that Greg Anderson (guitars), Pete Stahl (vocals), Greg Rogers (drums) and new bassist Scott Renner are now well and truly ready to get back on the ‘Snake. And to give these legends in waiting their dues, on the face of everything, since the 2000 release of the grungy Flower Of Disease on Anderson’s own Southern Lord Recordings, very little has changed upon the unleashing of the much anticipated Black Age Blues. Anderson still leads the forward line with his heavy duty brand of Iommism, backed by one of the tightest and most celebrated rhythm sections in rock (although the chrome-domed Dutchman Guy Pinhas remains a much-missed component on the new record) as Stahl wriggles, writhes and ultimately flies above their well-established brand of highly accessible doom. Black Age Blues is notable as an achievement in its own right by even being in the same ballpark as the monumental debut Goatsnake I and Flower Of Disease after all these years and listen after listen it delivers knockout punches and heart-fluttering moments aplenty. However, ultimately for me it does fall just short of surpassing the timelessness of those two metallic avalanches of sonic mastery.

Cleverly leading off with a warm and soulful ditty entitled Another River To Cross (lest we forget, Flower Of Disease concluded with the slumbering, peaceful fuzz of The River) is a sensible move from the LA veterans. Combining the gentle lapping of waves with the smooth strum of an acoustic guitar is a noble way of demonstrating the awakening from sleep of some true titans. It’s not long however before Anderson shunts into full electric mode with a towering riff and introduces Stahl’s distinctive and gorgeous tones to wash over us alongside some female backing gospels. Slipping stealthily straight into Elevated Man, it becomes clearer and clearer that Goatsnake have lost nothing in the way of power and momentum. This is their old school stomping ground – powerful, metronomic beats from Rogers are topped off by riffs that link the Sabbath of old to the proto-retro pastiches of new as Stahl rides the waves with an intriguing tale of noble evolution in one hand and some delicious harmonica verses in the other. It already feels like stepping back into a classic record, yet the back of the box still states “2015” loud and proud.

Coffee & Whiskey harkens back to the biker rock of past Goatsnake triumphs like Hot Rod and A Truckload of Mama’s Muffins as Anderson and Rogers ramp up the pummel until they sound like Saint Vitus covering Born To Be Wild as Stahl shapes and shifts his vocal delivery across Renner’s snaking basslines. There’s another Iommi-blaster of a riff left in the tank with 90 seconds left on the clock as Anderson churns away like there’s nothing left in this world apart from an endless mountain to climb and a copy of Sabbath Bloody Sabbath on vinyl.

It took me a while to see it, but the title track is truly the most important track on the record. The statement in itself Black Age Blues really does sum up everything about what Goatsnake are and they aim to achieve. It’s delicate blues, but played through the darkened tones of heavy amplification and pounding sincerity. Sure, that’s what the entire heavy metal mission is and hopefully always will be, but through their careful song-craft and understanding of both light and dark shades of what the blues can summon, Goatsnake once again prove their pedigree for composing doom records that anyone could relate to.

If I’m honest, this album fails to retain the same push in the second half as the first four tracks lay out, in much the same way that Goatsnake I peaked with Mower and never quite lasted the distance to its a grand finale, whilst suffering from track fatigue in the process. Sure, the sing-a-long “shine on meeeeee! Yeah”s of House Of The Moon, the chunky Grandpa Jonesand the muscular true steel of Graves are all tunes most bands would give their own ball sacks to nail down in the studio, but compared to the openers, they stick too close to the Sabbathian template and explore far less territory within their own agendas. Jimi’s Gone, a fitting ode to the passing of the late Mr Hendrix, is a simple enough, merry piece but yet Anderson’s crunching Les Paul riffage feels out of place on what should surely be a blues-only tribute to the greatest guitar hero of them all. Too much bombast, not enough Blue Cheer and Cream worship if you ask me.

A Killing Blues does redeem some of the magic of the Goatsnake sound in capturing the blues at its most beautiful and circularly torturing best. For once, Anderson’s guitar is a backdrop to Stahl’s brilliance behind the mic (rather than his partner in doom crime), following him along the corridor before letting him sprint free out of the door and into the night. It really does sound like the death of the album, in a good way, as Anderson and Rogers chime us out and into the aforementioned rainfall on some distant outback roof. Until next time then…

To give them their dues, Goatsnake have rocked up after fifteen years in the wilderness and brought something to the party in Black Age Blues. Rogers and Anderson still sound utterly phenomenal behind the kit and in front of the stack respectively and Pete Stahl remains, for me at least, one of the best in the business at concocting strong, emotive lullabies for each and every denim n’ leather generation. But if Goatsnake I was their Kill Em All debut and Flower Of Disease their Badmotorfinger classic second outing, Black Age Blues drops a little short of being a Masters Of Reality third, although it does sound a shitload like Black Sabbath. A great blackened blues album for the modern age? Undoubtedly, yes. But a timeless classic? Well, we’ll just have to wait and see where the shadow of the sundial of time falls for this latest age of Goatsnake.