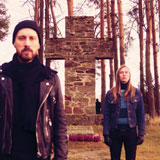 Doom metal, by its very nature and definition, moves slowly – that’s a given – but when you have a band such as Finnish trio Garden Of Worm forming in 2003, not releasing their first album until 2010 and then waiting five years to follow it up, with a year on hiatus in there too, it would seem that what you have here is very much a case of life imitating art, and not the inverse.

However, a case can be made that all good things come to those who wait, and in the case of Idle Stones the years between releases can be clearly heard, drawing an eminently traceable line from the early slightly austere doom metal with a gothic vocal approach of their 2006 Fresh Maggots EP, through the more overtly progressive ‘Maryland-style’ feel of their self-titled 2010 full-length to the sound that we hear on Idle Stones today – a warmer, jammier, stranger take on the progressive Maryland doom sound. Imagine a softer-edged version of The Obsessed colliding with Amon Duul II and you’d be in the right ballpark.

Fleeting Are The Days Of Man eases us into Garden Of Worm‘s sound-world circa 2015 with a relatively straightforward ebbing and flowing feel, light on the overt doom but still with enough darkness to make it clear that it ain’t all bees and flowers in this garden. Supremely warm-toned bassist SJ Harju bobs and weaves around the rhythm set up by the supple drums of JM Suvanto as guitarist EJ Taipale lays out barbed chordings, subtly chiming counterpoints and, finally, bubbling, burbling leads that erupt and shimmer across the push and pull of the rhythm section. Harju and Taipale’s voices blend together with one taking the lower register and one higher and further back in the mix, meshing wonderfully.

There’s something decidedly medieval about the atmosphere surrounding Summer’s Isle, putting me almost in mind of a doomed madrigal. Whether it’s the slightly baroque feel to the rhythm or the way the two voices weave together I can’t say, but something in there has me thinking of monasterial climes. When the pace picks up and things start lurching along a little more forcefully, I’m oddly put in mind of Geddy Lee, minus the histrionic edge singing atop an early Pink Floyd jam. Weird, but it works a treat! The relaxed, jammy aspect of the band’s newfound sound begins to come to the fore in the latter part of the tune as guitars begin to wah, reverberate and clang, drums flail and basses assume a punchier tone and begin to climb the scale. A Sonic Youth for the Middle-Ages anyone?

Desertshore – no relation to the beautifully desolate Nico recording – emerges from a haze of smeary, woozy languid jamming before snapping suddenly into focus midway with a crackling fuzztone riff and a punchy strident vocal line that sees both vocalists occupying the upper midrange in order to cut through the snarling, fizzing fuzz bite.

Finally, tolling bells and birdsong usher in closing near-twenty-minute epic The Sleeper (including Being Is More Than Life), shifting from the ominous-yet-pastoral intro into a decidedly bleak-sounding space wherein Taipale carves out sullen, brittle notes and chords atop a supremely restrained slow-mo shuffle from Harju and Suvanto, sounding something like a Skeletal Warning with a hint of the awkward dream-logic moves of prime Shudder To Think. Following a shuddering, shaking pass at a guitar solo, things drop out momentarily before chiming back in a decidedly modal fashion – I was strangely reminded of the ‘out there’ section of The Byrds Eight Miles High, thanks, most likely, to the slashing trebly kaleidoscopic guitar that slices across this entire section. Metallic vocal modulation serves to set the sound further on edge as things disintegrate into borderline atonal Easternisms and Moore/Ranaldo scree beneath the hollow, robotic intonation.

I really don’t know exactly what happened to Garden Of Worm during their hiatus, but based upon the more unusual strains seeping out of Idle Stones I wouldn’t discount a year spent on Yuggoth, out on the outer rim. The collision of sounds contained therein is certainly alien enough to plant that suspicion in my mind.

If you’re a brave enough soul to join Garden Of Worm out there on the edge, Idle Stones is well worth the perilous journey. It’s doom Jim, but not as we know it.