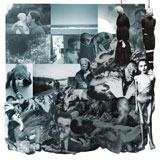 That Full Of Hell dabble in noise recordings on the side isn’t exactly a secret, but the fact that they open their new album Rudiments Of Mutilation with such a challenging opening track as ‘Dichotomy’ serves to show just how seamlessly they are able to weave their penchant for abrasive noise into their just as confrontational hardcore. The piercing feedback that screeches out of the speakers is a sharper, more painful proposition than the sub-sludge of many of the current crop of hardcore bands thieving from the monuments of His Hero Is Gone, and it serves to set Full Of Hell apart from the rest. The raw fury heard in Dylan Walker’s wretched vocals is not forced or faked, it’s the sound of true intensity.

When the band blast into the searing grind of ‘Vessel Deserted’, the power electronics element of their sound serves to augment Dylan’s vocals, giving them an almost dehumanised quality. When the tempo crashes to a crawl the feeling is not of respite, but a lingering dread, and when the vile vocal interplay begins, alternating voices spewing the syllables that constitute the mantra “There is nothing that can take what is dead…” it’s a genuinely unsettling sound.

The blistering triumvirate of ‘Coven Of The Larynx’, ‘Throbbing Lung Fibre’ and ‘Indigence And Guilt’ pass by in a blur of blastbeats, churning bass and caustic guitar. An interesting point to note is that just because the vocal delivery itself is mostly unintelligible, doesn’t mean that the wonderfully abstract phrasing of the lyrics should be overlooked. The way the words seem to flow through the songs suggest that they were carefully chosen for their texture, and how they could be structured together as much as their content. The band’s lyricist clearly revels in the joy of language. Name me another band who’s ever used the phrase ‘plangent torridity’? Or can even tell me what it means?

The ever-building momentum comes crashing to a halt with ‘Embrace’, a woozy, swaying drone played out over the ritualistic pounding of skins courtesy of Dave Bland. Dylan moans languidly over the whole thing, and even though the fevered delivery of the faster tracks is far from easy listening, this song is somehow even more unsettling. It’s followed by ‘The Lord Is My Light’, a torturous trudge through sludge territory, unsurprisingly the longest track on the album. It alternately seethes and howls, burns and smoulders, and ultimately exhausts the listener by the time it finally drags itself to a close.

They follow the mid-album lull with the visceral dissonance of ‘Bone Coral And Brine’, seeming to be a cross-section of their output crammed into one track; furious grind passages, howling, oscillating noise, and crushing slow sections. It’s a wretched Frankenstein’s monster of a track, with Eric Wood acting as the Igor that brings the beast to life. That metaphor is as confused as the track I’m attempting to describe.

The album’s title track is more straightforward, the initial flurry of blackened blastbeats giving way to a slow deathmarch towards the end. The thick, filthy bass and discordant guitar lurch along before collapsing into feedback, and so begins ‘In Contempt Of Life’, the most uncomfortable, oppressive track on the album, though it never quite picks up beyond the squalls of feedback and throat-shredding cries in the distance. There is plenty of space in the mix of this album, creating the sense that the sparser sections are being played out across some vast barren wasteland. It’s never more evident than in the slow burnout of the final track, Dylan’s final chilling cry of “A dead sun shatters…” barely audible across the desolate audioscape.

This album is not something you listen to so much as suffer through, and I suspect that was the intention behind it. Throughout the course of Rudiments of Mutilation the many stylistic, atmospheric and momentum shifts will confront and eradicate your expectations, as well as serve to confirm that there is no band out there creating an erratic racket quite like Full Of Hell.