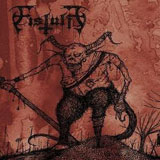 Okay, I have a shameful admission to make here, in all the years that Fistula have been around – which is around ten years now, not including the couple of years they spent dead for tax purposes from 2004 – I have no recollection of hearing them until now. I think I had a couple of comps with them on, ‘He’s No Use To Me Dead’ and so on, but I have zero memory of actually listening to Fistula. It’s strange, and I apologise, but I guess it means I get to listen to ‘We, The Beast’ with a fresh pair of ears.

I don’t know exactly what I expected to hear if I’m honest, I figured some kind of sludgy Bongzilla/Eyehategod kinda thang, and yes there IS an element of that in here, but I also hear heavy similarities to the taut, muscular hardcore sound of older 16 material – circa ‘Drop Out’ and ‘Blaze Of Incompetence’ – and the more metallic tendencies of Pig Destroyer – parts of ‘Terrifyer’ spring to mind, ‘Grave Dancer’ specifically, with its low-tuned metal chug.

The 9 tracks on this elaborately-packaged release – the CD comes in a DVD case, with a poster , full-colour inlay and some badges – alternate between sludgy heavy metal chugging with strident metallic chords, and more up-tempo old-school Death Metal parts ala Coffins – tempo-wise – with a few doomier moments and a couple more spacious sounding downbeat numbers.

HOWEVER…..I have two major criticisms that really spoiled my enjoyment of ‘We, The Beast’, namely the godawful production and the godawful lyrics. The murky, fuzzy production totally saps the energy and clarity from the songs – you can HEAR the mighty riffs under the fog, but they fail to leap out and eat your face off when you know they could. These guitars should be COLLOSSAL, but they aren’t, trapped under a haze of murk. The drum sound hits lows that are lower than Lars Ulrichs drum ‘sound’ on ‘Death Magnetic’ at a few points, which is a DAMN shame…but not as shameful as the childish ‘pissed-off’ lyrics.

Seriously guys, grown-ass men writing songs called ‘Bi-polar Bear’, ‘Die, You’re A Fucking Cop’ and ‘I Don’t Need You’? What are you, a 15 year old GG Allin fan? Come on! For a band that’s been around 10 years to STILL be writing about ‘being depressed’, ‘being a drunk’, ‘smoking weed/taking drugs’ and ‘hating cops/you/the fucking world’ in such a simplistic, childish way is beyond belief. Words are there to be USED, like tools or weapons – ANYONE can cry and whinge about ‘WAAAAAAAAAAGH I FUCKIN’ HATE YOU!! I LOOOOVE WEED, WHERES MY FUCKIN’ BEER….FUCK YOU PIGS!!’, but you would expect the person ‘articulating’ these ‘feelings’ to be either a 15 year old ‘punk’, an emotionally stunted retard or both. After 10 years, I would expect a little more effort – its lazy, its cheesy and its so DONE.

I KNOW Fistula can do better, hopefully they’ll grow the fuck up, quit the underachieving and rip my fucking face off next time.