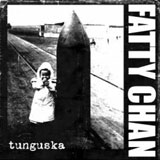 I’m guessing the name Fatty Chan won’t mean too much to anyone at the moment as, although the band have been in existence for the last couple of years on the Exeter metal scene they have maintained a fairly low profile to hone their craft.

Formed initially as a side project by current and ex members of local metallers Drivechain and Died Smiling (whose “Evolution of the Fist” album was released a few years ago by Casket Records), it would appear that for most Fatty Chan are now a fully fledged machine in their own right. Has the wait been worth it, for the most part I would have to say yes. Eschewing the more overtly metal stylings of their associated bands, the Chan boys have dipped their toes further into the stoner rock mire but shot it through with a dose of Pantera style aggression. The result, as you may expect, owes more than a debt to Down, particularly the Nola album. Not as overtly southern in flavour as the classic Down sound, Fatty Chan do deliver an excess of stomping riffage all over these 6 tracks (plus one bonus demo track).

The band are happy to ease back the pace on occasion but in the main these tracks rock along with the galloping boogie vibe you may expect from COC, Down, Alabama Thunderpussy…etc and they sure ain’t short of a catchy riff or two. One of the stand out attributes to the Chan sound is Matt’s vocals. This guy has a serious set of pipes on him, all belted out effortlessly with the warmth of a nice cup of hot chocolate on a snowy day and the depth of Pavarotti’s navel!!! Matt also knows a melody when it hits him and provides a tuneful counterpoint to the wall of chunk behind him. If I have one criticism it’s his tendency to slip into clichéd metal growling for no good reason. It fails to up the aggression level as he might expect and detracts from the killer delivery he is obviously capable of. Comparisons will be drawn between the vocals here and a certain Mr. Anselmo, clearly a major influence, but the growls won’t help to dispel these comparisons veering dangerously towards cloning.

Of the tracks here “Head Full of War” is the clear standout. Less stoner than many of its counterparts it bowls along with an aggressive glint in its eye and a flicknife in its pocket. This is one occasion where the more aggressive delivery works and sets this tune out as a highlight in their live set…and the band seem to know it as this song is approached like a boxer approaches a title fight. “Widow’s Weeds” eases the foot off the throttle a touch, not exactly a ballad but certainly displaying a more thoughtful side than some of the other tracks. “Pound” rides along on a slow snake-like bass line and is probably the most atmospheric track on offer here and build impressively even if it is a little over long. Generally the song writing is of a very high standard, a few listens will superglue these tunes to your synapses though some of the excesses could be slightly trimmed. Some of the riffs could be seen as surplus to requirements and if pared down would make this machine even more lethal but that’s a minor criticism.

The production is near faultless being clear and powerful with a fat-assed guitar crunch. Clearly a lot of time and dedication has been paid to getting this sounding absolutely spot-on and all respect to the band and the engineer on this. To my rock and roll addled ears though it does sound a little too clean. I’d like to see a little more dirt under the fingernails and a little more humanity. Having seen them live I would be very excited to see what the band could do thrown in the studio for one day and told to replicate their live set…now that would be something to hear!!!

Overall, a thoroughly impressive first effort, not perfect but in a couple of years time I suspect you’ll all be aware of the name Fatty Chan…you heard it here first!!!