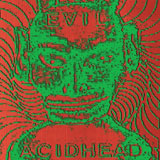 When you think of the name John McBain, the terms ‘nihilism’ and ‘anarchy’ aren’t the first words to come to mind, of course disregarding his cool as hell ‘fuck you’ guitar psychedelics that fated Monster Magnet’s Spine Of God as a virtual classic – nevertheless, McBain’s creative stamp has maintained a level of class and complexity that never borders on bombast, and more times than not retains a ‘from the hip’, carefree sense of humor. Even the more serious moments in Wellwater Conspiracy’s catalogue were tempered by the tweaks and noodling of an I Got Nightmares or the quirky roll and muscle of The Scroll – but rewind the clock to the late 80s and we get another side of the same coin.

McBain’s alter ego, Evil Acidhead was singlehandedly churning out a 77 minute 7 track analogue nightmare of percussionless feedback and sonic bedlam hellbent on jarring the psyche – but one can’t help but believe that his sense of humor was at play yet again, albeit for darker purposes; In The Name Of All That Is Unholy is the title he penned for this low budget collection of nameless freak-out rarities. Originally released as a cassette only album, it’s been remastered by McBain himself with CD and vinyl editions set for release June 2015 on Agitated Records.

Loop after loop of fuzzed dissonance, disembodied voices so distorted they’re unrecognizable as human in origin – it’s a nice slab of fermented ear candy, ‘tunes’ better suited for straight jackets – McBain taps a unique vein with material whose shock value is worth more than its longevity or relevance as traditional art. But in the end, who really cares about tradition or convention when you’re dialing into frequencies more in tune with John Carpenter’s Prince of Darkness – demonic messages from the future, premonitory tachyons from the year 1999, the Antichrist as the primordial anti-matter – It’s hard to say whether a trip this fucked is worth a second run, but for those “anti-people” looking for “anti-music”, this is definitely your jam. Recommended.