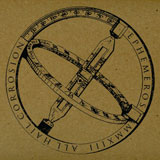 I’m a sucker for West Coast miserablists like Asunder, Aldebaran, Laudanum, Samothrace, and Anhedonist, so I was excited to hear of a relatively recent addition to this band of happy campers, Portland’s Ephemeros. Comprised of various gloomy luminaries from bands such as Nux Vomica, Graves At Sea, Uzala and Bastard Feast, these guys have a proven pedigree for creating harsh sounds for harsh times, and All Hail Corrosion, their debut offering, is an even more dismal sound than anything they’ve created before.

The title track opens with the plaintive chime of a lone guitar, before the full band come crashing in, all devastating weight and foul growl. From there it’s a slow burner of a track, their guitar harmonies have that beautifully melancholic quality present in all the best funeral doom, that sound that instills an ache in your chest. When done right, as it is here, there’s nothing like it.

Around the 6 minute mark the music begins to undulate like the swing of some great and terrible pendulum counting down the hour of your doom. When it finishes its countdown, everything is stripped away to the slow pounding of Chuck Watkins’ drums while vocalist Joshua Greene lets rip the sort of droning wail that Asunder would be proud of. As the track draws to a close, the guitars create a blackened buzz while Greene rants and raves like some endtime preacher.

When they crash into ‘Stillborn Workhorse’, the initial energy becomes a plodding funeral march that never lets up. They maintain the same momentum throughout the track, minor twists and turns aside. The lack of dynamics doesn’t detract from the fact this is another perfect example of funeral doom’s ability to drag you down to the lowest point with the crushing tempo, whilst offering that faint glimmer of hope in the melody. Ephemeros offer both despondency and redemption in their sound.

‘Soilbringer’ is as filthily evocative as its title might suggest, slowly coming to life with a groaning, straining riff, Greene’s vocals the roar of the beast as it fully awakens. The track unfurls further and further, guitars intertwining throughout, reminding me of the slow build that fellow North-westerners Samothrace do so well, however Ephemeros are a far more mournful proposition, their glacial melodies evoking coldness, even hostility.

Around 11 minutes in, Greene’s vocals develop a malevolent snarl, the music prowling maliciously, back and forth, back and forth before the scream of a guitar solo eases the building tension. As soon as it ends the tension returns, the momentum builds, and you fear for what may come next… but an abrupt halt to the album dissipates the ever-mounting terror.

It’s the sort of album closer that gives you the urge to play the whole thing through again. But not before a short break to gather your nerves.

All Hail Corrosion, All Hail Ephemeros!