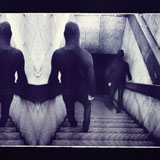 For some strange reason, everyone keeps calling Emptiness a black/death metal band. I might be quite late to the party (Not For Music is the band’s fifth full-length, not including three demos), but I don’t get the use of the label. Although it is true that Emptiness‘ previous records have been much more in the black metal vein, Not For Music moves far beyond that into soundscape creation that merges elements of ambient, gothic rock, doom and industrial music. Yes, the black metal is still there, but it has been relegated to the side in favour of a far more expansive and experimental sound. Not For Music mixture of menace and calmness is unlike most other music you’ll hear and it’s not for the faint-hearted.

One element newly introduced to Emptiness‘ alchemical experiment is the input of Jeordie White, better known to some as Twiggy Ramirez of Marilyn Manson, A Perfect Circle and Nine Inch Nails. Offering advice and production guidance, as well as offering Sean Beavan to mix the album, (Beavan also mixed Antichrist Superstar), White’s gothic/industrial heritage can certainly be heard on the album. The guitars are deeper in tone, the drums a little punchier and washed in reverb. However, Emptiness‘ own unique sound has been very much preserved.

In an interview with Noisey, White said of the band that “I think it’s just some of the timing and spacing of their sounds. It’s not always on the one. They push and pull”. It might be cheating to use a quote like this in an album review, but I think White nails it. There’s an off-kilter, almost vaudevillian feel to the songs at certain points on the album. The helter-skelter guitar work on Your Skin Won’t Hide You – a standout track on the album – and layered rhythms of It Might Be snake their way through the song, surreptitiously. It’s heady, claustrophobic and altogether unsettling. Layers of sound are used subtly to create an intense wall of noise that, though still melodic, gives an uneasy feeling that’s hard to define on the first couple of listens.

Contrast this with Emptiness‘, admittedly infrequent, use of more open and expansive chord work, and the result is an album that twists and turns constantly. Opener Meat Heart moves from a steadily building jackhammer guitar rhythm, punctuated on every beat with bass peddle, to a lush pad that comes straight from Vangelis. Circle Girl shifts from crazed strumming and atonal slides up and down the neck (with some of the most frenetic drumming I’ve ever heard used as a mid-tempo steady ‘beat’) to softly played guitars and eerie, hollow, howling noises. It’s like stepping out from catacombs into the open night.

All of this trudging cacophony is accomplished before the vocals even enter the picture. Phorgath, who you might also recognise from Enthroned, growls like a man possessed. He croons over the mix like Peter Steele, and his thick accent definitely exaggerates the menacing mood. Unlike most conventional blackened death metal (and again I’m not convinced by the relevance of that generic title here), the vocals are pretty clean and very, very low. There’s an interesting use of group vocals on tracks like Digging The Sky, where the additional voices gently follow a vague melody, but act more as percussion or punctuation than anything harmonic. It all adds to the strange concoction of industrial pounding and ambience, aggression and gentility, and straightforward but meandering sound that is Not For Music.

Not For Music is a contradiction. It’s hard to pin down. It follows one path but shifts down another. It’s haunting, sometimes delicate, sometimes abrasive. Emptiness have moved beyond their blackened death metal roots and ventured into some little-charted territory. On a first listen the effect can be disorientating, even overwhelming. But every time I’ve returned to this album I’ve got something else from it. Like the band itself, it’s an ever-evolving medley of styles and influences. A delicate balance, but one which I believe Emptiness got just right.