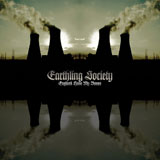 How’s about some roaring pagan magick-music to wet your summertime whistle? Earthling Society’s long-delayed platter of lysergic love-cookies (four of them) comes dusted with the musical equivalent of popping candy. Of course, like all good med-heads, they’re into the classic Teutonic grooves of Can and Harmonia, the bone-dry racket of Texans the 13th Floor Elevators (and no doubt Golden Dawn), and the propulsive bluster of our very own Hawkwind. It’s a combination peddled to varying degrees of success by folks as diverse as The Black Angels to The Arch Drude, Wooden Shjips and The Cult Of Dom Keller to Brian Jonestown Massacre and Dead Meadow. It’s a potent strain of the herb we call ‘rock and roll’.

The tunes themselves, as you’d likely expect, are monolithic sonic collages of caterwauling feedback and hissing, sibilant locked-in grooves.  Earthling Society’s particular blend leans more towards the galactic gallivanting of space rock messiahs Hawkwind and Gong – second track Tortuga, in particular, seems like it has been seeping into your consciousness for aeons, a kind of sensory recollection of a time you never knew you knew. The restrained, hypnotic rhythm lays a deep and tantric groove down for the hushed vocal and spiralling guitar line to flow out of. It’s a thoroughly enthralling number that, at around the six-minute mark, seemingly implodes in a cloud of searing feedback that envelopes both the track and the listener. It’s the ubiquitous ‘eureka’ moment that seals the deal on an exploratory tune like this – it doesn’t necessarily need an explosion of fuzz, but it certainly helps you wig out to the fullest.

Crowley nuts like yours truly know all about Aiwass – the track so named is so engaging that it becomes completely immersive. The track offers a complete cranial re-fit, offering as it does a bombardment of subliminal and overt ‘CHILL OUT’ messages that pop up in your mind like soothing breezes on a burning summer’s day. It’s that potent. Even the squalling feedback guitar solo screeches never become too intrusive, rather they display the light and shade your brain is already feeling anyhow.

The main attraction is the Alice Coltrane homage/cover/reimagining/reboot Journey Into Satchidananda. Alice Coltrane, if you’re that way inclined, can soundtrack some of the most revelatory moments of your sonic life. Personally, I find her music, particular the album from which this track takes its name (or vice versa, you catch my drift?), is one of the most listenable, accessible experimental jazz releases available. It’s an influence on everyone from these dudes to Sunn O))), Wolf Eyes to Paul Weller (!)… check it out. But first, check out Earthling Society’s masterful, spectral envisioning of Alice’s magnum opus. It’s both subtle and full-on, spaced-out and locked-in. It’s the perfect dichotomy with which to listen to music like this for the first time. Highly recommended. The album closes – too soon, I might add – with the title track, England Have My Bones. It opens with a hyperactive, manic guitar screech and closes with an icy-cold (literally ‘chilled’) vibe that conjures images of DEEP space. Far out amongst the unknown kinda thing.

This is a superb record for fans of ‘the genre’ and relaxing, soft drugs and inner peace. I absolutely loved it – and if, like me, you’re a fan of the bands I mentioned in way back up the top there, there’s plenty for you to enjoy here. Particularly check out the Alice cover, it’s a fantastic achievement in honouring an icon’s legacy without detracting from the unique vibe of the innovative original composition.