I thought postcards from new zealand were the most mysterious band I had encountered thus far, but that band at the very least had some level of social media presence with Instagram and Facebook accounts. Detroit band (if it is indeed a band and not a one man solo affair) Drug Toilet have a Bandcamp page and… that’s it. The only reference to them that I could find was a small No Echo webzine article and they didn’t seem any the wiser either as to the band’s identity.

The only information therefore that was included with the release was a short statement ‘Drug Toilet records on a stolen iPhone in a foreclosed nail salon near Comerica Park in Detroit’. This lack of an internet presence makes you think you were living in the 80s/90s where news of new bands and records often came about through word of mouth or print media, and which certainly brings with it a certain retro charm. Indeed, it is hard to imagine many artists managing to exist in the present day without every facet of their lives being publicized and pored over or endless plugs for albums and tours on social media. This of course points to a band that is clearly playing by their own rules.

The band released a four track Demo last year titled MMXX and Believe In Love marks their debut proper (as it were). The band’s name is also definitely not safe for work and as with Sex Swing who I reviewed last year, a Google search should probably include Bandcamp or band in it to avoid potential embarrassment. Who knows what images could be summoned after all! The album cover is a crudely drawn picture of some poor unfortunate being eaten by an ungodly entity and art fans may be reminded of Francisco Goya’s own disturbing piece Saturn Devouring His Son. The cover’s hand drawn (?) style also points to the DIY quality of releases by vintage crust punk acts such as G.I.S.M and Anti Cimex.

The release which consists of a mere four tracks opens with Believe In Love (閻魔大王), a number that starts slowly, almost doomy in tone before alternating with savage hardcore. It’s akin to a twisted variation on The Pixies quiet-loud formula and that is what is so surprising about the track, this effortless shift in dynamics. Whoever Drug Toilet are, they’re certainly no musical dunces that’s for sure. Second Death is the shortest track on the EP at a mere fifty seconds and as the name implies, it betrays a heavy death metal influence, what with the grinding riffs and guttural vocals. It feels more like a novelty track due to its length and style but is perfectly serviceable nonetheless.

Suspended In A Single Beam Of Light is possibly my favourite track on the EP, the beginning has a black metal feel with some pretty awesome blastbeat drumming before evolving into an early crust punk sound ala Anti-Cimex and Pain Of Mind era Neurosis. As a lover of New York hardcore I was delighted to hear concluding track Extragalactic Terror, which reminded me sonically of Sheer Terror from around the time of Just Can’t Hate Enough, Paul Bearer’s gruff vocal style is especially prevalent.

Believe In Love, as a whole, was a curious listen and due its length of just six minutes, it didn’t exactly take up a lot of my time. For a release so short it was surprisingly diverse and experimental in places, helping to serve as a useful introduction to the band. 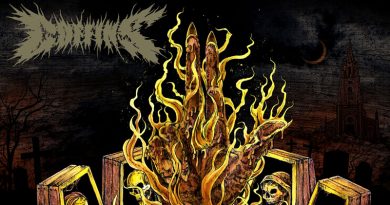