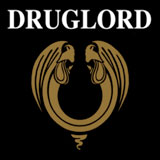 Generally I avoid bands with conspicuous drug-referencing names or images as, well, it’s tedious, played-out and quite frankly a little childish – “Ooooh, look at us! WE do DRUGS! NAUGHTY DRUGS!! Aren’t we the li’l rebelious counter-culture outlaw scamps?” – but every so often you have to break your own self-imposed rules when something comes along and impresses the shite out of you.

Druglord is one such case.

With such an impeccable pedigree – drummer Bobby Hufnell played in the early version of seminal Richmond post-punkers Honor Role and bassist Greta Brinkman has played with everyone from L7, through Pigface, to Moby and Debbie Harry – it would be a near mathematical impossibility for Druglord to suck balls….and suck balls they do not. Motherfucker Rising is four hefty tracks of balls-out, only-slightly-stoned, DOOM; a wall of fuzz so chewy you leave teethmarks in it built upon a rock-solid monolithic rhythmic foundation and topped with torturously paranoid vocals that encroach upon the territories of Buzz Osborne at his most fraught and Edgy 59 at his most stressed, adding an occasional throaty Matt Pike edge to boot. The whole thing is dank with fuzz, just dripping with the stuff, but miraculously manages to stay the right side of woolly, tonally-speaking.

Front-Yeti Tommy Hamilton provideth the voice and the axe-work, dropping slabs of fizzing riffage and pouring forth molten leads like it ain’t no thing. Most of those leads are warped with phasing and various effects, adding an acid-fried hue to proceedings – indeed, there are other moments of pronounced psychedelia aside from those frazzled leads, most notably the sudden burst of eastern-sounding melody during closing tune ‘Eternal Grave’.

Everywhere else though, things vary between a moderately up-tempo, yet still lead-heavy, doom groove, bludgeoning slow-mo riffola and massive blocks of prime THUD. So far, so typical, right?

What sets Druglord apart from the masses of other bands in a similar vein – and believe me, here at T’Shaman we know exactly how many of the Sabs ‘n’ Sleep-worshipping bastards there are out there – is the sheer conviction and confidence oozing from the very pores of the CD….err, if a CD has pores…these guys, and gal, OWN IT, and that goes a loooong way toward separating Druglord from the pack.

Now, it is early days for Druglord – this is effectively a demo recording, albeit a superb sounding one – having only started in 2010, but clearly this is a band that has something. Once a higher-profile label snaps these folks up and they spawn a full-length recording, well, the seas may boil, the earth may crack and seas may run dry…..get on the bus before it’s too damn late.