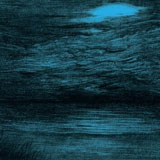 Fresh from having their …And So Our Troubles Began CD unleashed upon the world at large, Dublin’s Drainland return in order to ruin your ears and wreck the front room, only this time, they’ve brought some friends.

Trenches, with whom they share this split LP, are a Galway-based band with links to crustcore monsters Bacchus, and they and Drainland fit together here like two nasty peas in a diseased pod. They go together like war, famine, pestilence and plague, like tunafish and lamb – complimentary –  and this compatibility doesn’t end with music, no sir, their lyrics are just as bleak, hostile and stark as one another too. Warm and fuzzy they are not.

For their side of this slab o’ wax, those Drainland boys bust out a sidelong piece entitled ‘The Abduction Diary’, split into three ‘movements’, entitled ‘Stairs’, ‘Parallel Venoms’ and ‘Horror of Horrors’. Coming in off the back of an eerie sounding Wurlitzer organ, the atom-smashing discordant crust soon takes ahold as the band smash, glower, swagger and loom their way through sixteen minutes of seriously vicious His Hero Is Gone-inflected power-crust. Lurching between punchily dramatic stabs of doom, screaming hardcore and full-on power-violent blastbeats, Drainland give us a masterclass on how to OWN IT.

Breaking things down twelve minutes in, well-placed atmospheric ambience and clean guitars go a long way toward creating and building tension, as Jamie Grimes’ impassioned vocals turn nasty again and all hell breaks back in, creating a turbulent vortex of white-noise guitars, thrashed cymbals and venomous vocals that sear the ears, eventually bleeding out into feedback and nothingness.

Flipping the record over offers little respite, as Trenches are almost as much of a fearsome proposition as Drainland. A more evenly-paced beast, Trenches offer up a single fourteen minute track entitled ‘Vaccine’, that glides stealthily from an almost desert-rock groove to a glowering, low-slung mid-paced pummelling crustcore riff with ease before breaking down into a dark, rolling midsection highly reminiscent of the German bands of the late nineties such as Systral and Carol, which is no bad thing at all. Slowing to a crawl, a thudding drum and bassline is soon all that is left until brittle guitars begin to chime in, circling like vultures before the throaty bestial vocals and distortion kick back in and things become doomed. Cut up guitars like helicopter blades signal the end.

Once again, Drainland effortlessly prove that they are leagues ahead of the current crop of metallically-influenced dark hardcore/crustcore bands that are plying their wares right now, with Trenches not too far behind ’em, and together both bands prove to be a pair of extremely attractive  plumes in the increasingly feathery cap of the Irish underground scene.