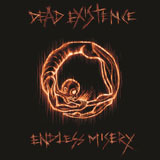 London’s Dead Existence were a staple of the UK sludge / doom scene since their inception way back in the murky mists of 2004. After over a decade of breaking faces and dragging riffs from the very bowels of the earth, the five piece have sadly called time, and enacted a possibly (but hopefully not) permanent hiatus.

Before the curtain fell, they blessed (or perhaps cursed) our ear holes with their second studio album – the aptly titled Endless Misery. Eight tracks of breathless, crushing density that may very well have secured their place in bitter beatification.

Opener Consume begins with brief stabs of riff before mutating into a truly rampant charge, spurred on by Maxim Seiter’s relentless kick drum barrage. Huge, muscular, chugging guitars continue to whip the track into a frenzy, before evolving into a slower, more deliberate section. Jake Harding summarises the tone of the whole record in his booming, unhinged style: “Just remember you’re a fucking leech / and you don’t matter / your life mean absolutely nothing”, which ushers in a riff that treats your ears like Kathy Bates treats ankles.

End Devoured By Beginning kicks off with an oddly jazzy drum shuffle, swiftly joined by a twisting, expanding riff. There’s an overarching sense of paranoid tension, an uneasiness that breaks with a wave of crushing, gravitic intensity, a burly, grinding riff that you are helpless in the face of. If you aren’t furiously air drumming by the end of this one, there’s no hope for you.

… is just that – a brief ellipsis, a caesura comprised of droning feedback. Worthless is cold, almost black metal riffwork and drumming, full of bombast and grandeur, before breaking down into a tumbling mass of manic, broken riffing. Tear Apart The Veil begins with a sick descending riff, a slick groove like Pantera played backwards in the wrong order. Machine gun snare rolls and Harding’s clear yet snarling vocals hurl the track along with a flesh ripping, almost hardcore intensity. There’s a brief break for Matt Grierson’s bass among all the feedback, before an almost apocalyptic close.

Obsidian Black contains arguably the riff of the album – absolutely rampant, building a sense of impending doom that has you waiting for it all to come crashing down. When it does, it’s a physical thing, a wall of noise that is unspeakably satisfying. Things slowly, organically slow into slower, writhing section that showcases’ the bands almost perfect tone.

Delusion Of Hope is more of a soundscape, unsettling robotic voices, crunching synths and frail piano keystrokes. Closer Regretamine crawls along, coming from a similar mental space to scene fellows Undersmile, all huge, tar thick chords and atonal guitar motes. It’s restless, constantly shifting, and impossible to tear yourself away from.

If the Londoners must bow out, they have done so on the highest of notes. There’s a sense of purpose surrounding Endless Misery, the idea that this is the result of ten years of hard work, everything pulling together to make something vicious and vital. Filled with enough despair to be cathartic, but balanced with enough rage to stop it being too maudlin. These are lengthy songs, but well crafted, the band do not try to pack in too much, nor do they sit back on their laurels and rest on one strong riff.

It is a true shame, for both new and old fans, that these songs may not get a live airing anytime soon, if ever again. But the band’s name evokes the power of music as a lasting art form. Although they may be ‘Dead’, after a fashion, their music persists on, ready to be stumbled upon anytime, anywhere, ad infinitum. An eternal existence. Truly Endless Misery.