Rolling into view with their debut album, Rhode Island two-piece Coma Hole are about to solidify the theory that sometimes less is more. Following in the footsteps on such hallowed ground that one of my personal favourite bands, Crystal Spiders walk, should prove pretty tricky navigation, after all, Crystal Spiders, for me, are the benchmark for female fronted stoner doom duo bands in the twenty-first century.

In fact, I think I would go as far as to say that Crystal Spiders are probably my favourite duo, full stop. That being said, if you’re going to get in the ring, you best be ready to fight, and boy, do Coma Hole pack a punch that you wouldn’t want to be on the receiving end of. Not to say that the crown is in any fear of being transferred, because when you love a band, you love a band, and that runs deep, but let’s just say, Coma Hole are a close second.

So, Coma Hole is the work of two incredible musicians, Eryka Fir, who assumes vocal duties, and all bass line string hooks, and Steven Anderson, who snuggly fits in place behind his drum kit, ensuring all manner of ungodly noise spews forth from his rhythmic poundings. Proudly nestled within the desert, stoner, and doom rock genres, there’s more than meets the eye to this duo.

Grunge tinged outpourings set this band aside from the norm, as regards stoner rock, and if listening without any visual clues, you would easily be forgiven for thinking that the band is a trio or even a four piece at very least. Such is the wall of sound, that to believe it’s only two humans making such a monstrous noise, is pretty unthinkable.

To get a clearer idea is to pull apart the release, and dig through the bones, to find just where this all comes from. Over the course of the four tracks, there are nearly thirty-six minutes of music, so there’s plenty of time to give yourself to Coma Hole, and rediscover just how good stoner and doom rock can really be.

Opening with The Familiar, the droned entrance is compacted in sound by the addition of feedback, cymbal crashes, and bass guitar fuzz. It leaves no doubt where this is all heading. As the gear shifts into a slow and drudgy stoner grunge sound, I’m instantly tickled by the notions of early Soundgarden. It has that hypnotic lurch of Loud Love, and you’re half expecting a Chris Cornell vocal to kick in at any second.

As the track progresses, so too does the urgency, until a pounding explosion of drum kicks in. With a full on vocal against a fuzzy bass and those thunderous drums, it’s like a wall of stoner fuzz. Well, grungy stoner fuzz to be precise. It feels like Dirt era Alice in Chains, with its drudge in the quagmire, but with a vocal somewhat reminiscent of Elin Larsson of Blues Pills.

Over the course of the almost twelve-minute track, it ebbs and flows in pace and intensity, and between the moments of storm, there are some absolutely lovely calmer passages. It really shows the skill involved in building this piece, and even on the remaining three tracks, this is always evident.

Old Climb capitalises on the first track, without letting up the pace, and as the vocal kicks in, it’s urgent and punishing. It’s a breakneck piece, and by the time it’s reaching its climax, the drumming has hit a death metal stride, with blast beats pummeling the air.

Wind And Bone takes us back to that lurching drudge, before dropping into a truly monumental stoner doom outpouring. Again, it shifts between powerhouse passages, and slowed, drop gear sections, and it’s a revelation to hear. Far more invigorating than the usual stoner and doom fayre, this really does pack a punch.

Sinking closes the EP, and at just over eleven minutes, there’s still plenty of life in the beast yet. After a tentative start, there is a flurry of drums, followed closely behind by that bass fueled fuzziness again. As it surges along, the clear and precise vocal really elevates the piece.

Like a game of two halves, mid-way things change, and it drops down to near on collapse, only to be revived in a darker phase instead. It slowly rises again, until it’s pushed back to the same level as earlier, and this follows through, until it drops off, and dissipates into nothingness, as it comes to an end.

For a debut, this really is something of real quality and should be on any doom rock fans list for future purchases. It doesn’t stray from the path, which, let’s be honest, is a well worn path, but Coma Hole bring something new to the table, and it’ll really be interesting to see where they go next, in the evolution of both themselves and their sound. 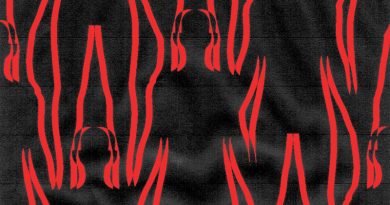