Hailing from the ancient Roman fortress of Lindum Colonia (Lincoln, Lincolnshire), Concrete Ships dropped an EP in November 2018 and now present their latest assault of psychedelic-tinged noise rock through the medium of Trepanation Recordings. Bassist/vocalist Chris Thompson has defined the album as a study of the precise moment when comfort becomes discomfort. Thompson and co. could not have picked a better theme to shroud what we are about to hear.

Akin to their 2018 EP which was recorded under a 17th-century stairwell, In Observance retains the band’s connection to the past as the entire album was recorded in the opening weeks of 2020 within the stone confines of a 13th-century castle. Veiled in the shadow of the 600 year old structure, unbeknown to themselves, Concrete Ship’s latest output was acting as a blind foretelling of the monotonous cacophony that would become 2020. Consequently, In Observance is a collection of sounds that found their way out from the bowels of the past only to warn the listener in hindsight.

Split into six sonic studies, In Observanceexplores the theme of Sisyphean effort through a swaying momentum of high energy violence, only to be caught aware of itself and brought back to civility from the brink of hysteria. The album opens with Flotilla; a full, heavy and visceral ordeal that immediately catches the listener’s attention. Themes of eternal recurrence are explored through the repetitive instrumentation of churning guitar, chugging bass and heavy, half-time drumming. Somewhere, far off in the distance, we can hear Thompson’s not sung, but yelled vocals, creating a contradiction of agoraphobia and claustrophobia. Repetitive in its nature, the opener’s effort is not lost to boredom and becomes almost trance-like, allowing the listener to relate to what has become at this point all too familiar; contempt through habit.

Compared to Flotilla, A Record Of Ancient Matters is more conservative in its feel. Here a vacuum is created. As the steady 4/4 drums remain isolated behind the plodding bass and vocals, we can sense space and emptiness. Atmospherically we remember the agoraphobia created by Flotillabut as the vocals move from distant whisper to desperate scream, we’re brought back into the clutches of confinement until the album crashes into its own midpoint: Clouds.

Concrete Ship’s music conjures the likes of Swans, Bodychoke, Unsane and Moutheater, but their ideas are fresher and ask bigger questions…

Until this point In Observance had showcased the introspective investigation of uncomfortable monotony by unearthing its own roots from the disparate soils of hardcore, punk, doom and discordant metal. However, the appropriately titled Cloudsdraws more on psychedelic influences as the listener is exposed to an up-beat and rolling melody. Out of this entire endeavour is the song’s outstanding bridge as bassist Thompson creates a discordant rhythm behind Jamie Batt’s drumming and Joe Dickinson’s dreamy guitar work, which does not entirely compliment the piece, yet seems to lead it along. Lyrically, Cloudscaptures the philosophy of futility which has been Concrete Ship’s mantra throughout: ‘The Clouds came, they brought nothing, nothing but the same’. Once again, the band’s unknowing prognostication of the year to come hangs thick in the air.

A personal favourite, the title Vibration White Fingeracts as visual aid for the album thematically. Just as white finger is brought on by repetitive strain through the use of heavy machinery, the crushing, tedious drone of the rhythm section makes the ordeal feel longer than it actually is. Vocally, Thompson feels entirely disconnected with the song, thus allowing his words to feel like a spoken-word set, bringing to mind Children Of God era Swans, or an even more bold comparison; Black Flag’s Family Man.

The hauntingly titled conclusion We Never Werefinalises the theme of recurrent futility, beginning with an eerie dronescape that leaves one feeling as if they were standing at the precipice of the end. The seemingly endless vibration is broken by a thunderous crash of sound as the band’s crushing echo gives way to almost upbeat melody companioned with an undercurrent of aggression. As the band pendulums between velocity and controlled calm, the album, along with the theme of unending recapitulation ends. Like everything, this movement too must end.

As a whole, Concrete Ship’s In Observance is perhaps more interesting intellectually than it is musically. This is by no means a criticism; it’s a compliment, for here is a band that has given us something to think about. Something that we have all had the discomfort to face throughout the last year: the realisation that when we really look at the bigger picture, life is quite small and recurrent. Concrete Ship’s music conjures the likes of Swans, Bodychoke, Unsane and Moutheater, but their ideas are fresher and ask bigger questions than most bands do these days. Check out In Observance for a smarter, more introspective approach to noise-rock. 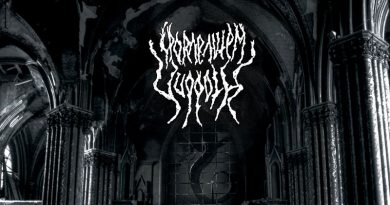 Review: Sporae Autem Yuggoth ‘The Plague Of The Aeons’