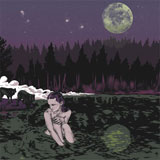 Following on from last year’s debut full length ‘Narwhal’ comes ‘Wood & Wire’ which sees Undersmile cover increasingly ambitious ground in releasing a full length split with their acoustic alter ego Coma Wall; the band continue to define themselves as an outfit with numerous and changing influences, and one that is – whether deliberately or not – evolving creatively with each release.

The Coma Wall side is three tracks of sparse and hypnotic Folk Americana with a sound similar to that of a sped-up, new era Earth – particularly ‘Hex’, and the ‘Angels of Darkness: Demons of Light’ albums. There’s also a Neil Young quality to some of the stuff (particularly his soundtrack to ‘Dead Man’, which Dylan Carlson actually cites as having had a big influence on Earth’s Hex record), and at times I even think of some of that Alice in Chains acoustic album, except that this is just generally better and has none of that unintentional frailty that came with Layne Staley being a poor, drug-addled shell of a man by that point.

In the three Coma Wall songs, dense and low guitar and cello chords swell and hang while neat banjo riffs and subtle, considered drums eke a sense of slow but triumphant progress out of the foreboding drone. As for the vocals, rather than pad things out with superfluous adjectives I’ll just say that they are brilliant – the two voices used together manage to achieve harmony as well as dissonance in all the right places.

Having referred to that Alice In Chains album earlier, it’s great that Coma Wall isn’t simply Undersmile unplugged, but that the band have managed to use the same staple elements to create a different sound and aesthetic. Aside from the prevailing sense of cool moodiness redolent of some noir western soundtrack, there are passages of sustained melancholic beauty; and the two are at times blended, and at others used in opposition to great effect both in terms of dynamics and in suggesting a narrative across the twenty-odd minutes of music. ‘Summer’ and ‘You are my Death’ are both new compositions, and while the last of the three Coma Wall tracks ‘Cutters Choice’ is technically an Undersmile cover, it’s been re-worked rather than just given the acoustic treatment; which makes you realise how much thought and care has been put into this release, and that this band clearly love what they do – not just to the end that they enjoying playing music, but in presenting material they can be proud of.

The Undersmile side of the split opens with ‘Soil’, which starts with a tense clean guitar line that wouldn’t necessarily sound out of place on the Coma Wall material, but suddenly erupts into a bigger meaner version of the same riff – and it’s a belter; it’s got that recognisable lurch to it, but it just sounds a bit more hench and confident than the jagged Swans-style bludgeoning of Narwhal . Subsequent songs lean a bit more towards the recognisable weird brutality of previous Undersmile stuff, but there’s definitely a more noticeable fixation on big, cathartic, head-bang friendly doom riffs throughout this collection of songs. It’s as if some of the haunting subdued element has been given over to Coma Wall, and it’s made room for a heavier, more direct Undersmile. Having said that, whilst it’s true of ‘Soil’ and ‘Killer Bob’; closing track ‘Hives’ is near terrifying in its opening section, with vocals that sound like Gregorian Chant for the undead, and the insistent toll of one bleak un-chord beneath before the song settles into an extended sparse ambient passage of ritual drums and spectral vocal harmonies, rising again briefly towards the end but eventually leaving only a drum beat to bring the whole thing to an eerie, deserted close.

I was really impressed by Narwhal when I reviewed it last year, and really wondered if the follow-up would be up-to-scratch in comparison, but I genuinely think this split marks the best thing these four Oxfordshire smashers have done yet. Bloody great.