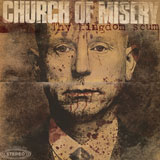 So they did it, they finally did it. This summer, Black Sabbath’s ‘13’ was crowned the UK’s number1 album, 43 years since they last topped the charts with a little old bunch of metallic ditties known as ‘Paranoid’. ‘13’ has already surpassed the expectations of many a hardened doom-fan, although many still remain sceptical of its Rick Rubin-tinkered sound mix or a significant lack of reWARDing drums. Yet as much as it is gratifying and undoubtedly very important for us to focus our attention on and sing the universal praises of a band who’ve been so influential to so many millions of fans and musicians for close to 50 years, it’s also exactly the right time to start focussing on today’s apprentices rather than our great, original sorcerers. Japan’s mighty Church of Misery are just one of many thousands of bands who worship at the Iommian school of songwriting, riffs and evil, but yet somehow they manage to time and time again surpass and outdo all of their peers with their interpretations of Sabbath’s greatest of all gospels: that of true DOOM. ‘Thy Kingdom Scum’ is Church’s fifth full-length album and frankly if you’re not persuaded by the close of its seven mind-blowing bouts of glorious metallic might that these Eastern demons are the new true keepers of the inverted cross, then you may as well not bother buying another doom record ever again.

It’s honestly refreshing to see that ‘Thy Kingdom Scum’ once again sticks loyally to Church of Misery’s own existing template: six outrageous, boogie-filled, acid-fried tabs dedicated exclusively to the sickest and most disgusting serial killers the world has ever known, plus a riotous cover of ‘One Blind Mice’ by ‘70s UK Hammond-humpers Quartermass. As ever, Tatsu Mikami (bass) and Junji Narita (drums) combine to summon forth some of the filthiest and tightest rhythms that the rock world has to offer, whilst eye-popping frontman Hideki Fukasawa brings the infamous homicidal monsters to life with his unholy, glass-scraping growl. The spirit of this record however belongs most of all to its unknown quantity in the form of new guitarist Ikuma Kawabe. Replacing the solid and righteous skills of the out-going Tom Sutton is no mean feat in itself, but yet it doesn’t take long for Kawabe’s own sublime fretboard skills to pick up where his more than able predecessor left off: smashing down the back doors of Riff City.

Kicking off the triumphant instrumental ‘B.T.K. (Dennis Rader)’ (chilling short-hand for the convicted Wichita mass murderer’s “Blind, Torture, Kill” motto) with Narita’s spine-tingling floor-tom beat, spoken-word extracts from the court case itself and the distorted awakening of Mikami’s bass makes for a truly formidable opening. By the time Kawabe’s belter of a debut riff arrives, your head is already craned starwards with your neck banging it slowly backwards and forwards. It’s one hell of a way to announce the return of such a prolific, yet still somewhat mysterious act to our blackened ear drums. ‘B.T.K’ will make an absolute killer of a set-opener and by the time the Eyehategod-meets-Crowbar-esque riffs wind down to a solemn conclusion, it’s already impossible not to listen to ‘Thy Kingdom Scum’ play right through to its last gore-driven track.

‘Lambs to the Slaughter (Ian Brady & Myra Hindley)’ is an altogether faster wrecking ball of blues-soaked aggression. Fukasawa makes his first impressions known with a Lee Dorrian-alike “oooomph!” and proceeds to blast us with continuously bouncing bombs of petrol-doused fury. This is a treat for anyone who’s already missing ‘Caravan Beyond Redemption’-era Cathedral and the cosmos-gazing solo from Kawabe is just one of his oh so many highlights. ‘Lambs…’ slides beautifully into ‘Brother Bishop (Gary Heidnik)’ – the pleasant tale of a thankfully now-executed Philadelphian gentleman who kidnapped, raped and tortured six women before keeping them captive in his basement. Appearing complete with a video, largely of live CoM footage and sepia-tainted TV news scenes, well in advance of ‘Thy Kingdom Scum’s June release, it’s well justified as the quintessential piece and cornerstone of the album. Kawabe’s guitar-work both mirrors Tony Iommi’s past conquests (most notably, ‘Brother Bishop’ bares stark similarities to Sabbath’s ‘Into the Void’) whilst at the same time stacking giant riff upon giant riff upon a foundation of purist Southern rock. The opening two riffs alone are already salivating enough, without Mikami’s low-slung right hand sledgehammering away through potent grooves and thunderstruck hairpins behind his bass in accompaniment.

As much as ‘Thy Kingdom Scum’ is one of the best all-round sludge/doom records I’ve heard in months, if not years, for me its standout moment lands firmly with ‘Cranley Gardens (Dennis Andrew Nilsen)’. Initially slowing down the pace and volume after a horrifying news clip of the immediate aftermath of the Muswell Hill Murderer’s capture, Kawabe and Mikami lead us through a ‘Planet Caravan’-esque stomp through pastures of both Blue Cheer and Deep Purple alike. The tensions and tempos subsequently ramp up slowly but surely into a deafening rampage towards the track’s titanic conclusion with Fukasawa bellowing Anselmo-like the deliciously sadistic lines: “Never gunna love you baby, Never gunna leave you baby, I’m gunna fuck you, And I’m gunna kill you!” Charming.

The Quartermass cover is, by the press release’s own admission, “a murder and then a rebirth of another evil ghoul” and gives us a 3-minute slam of biker-punk-stoner fury. It’s a fun song and a very welcome respite (if you need one!) from the doomy din of the previous four tracks. ‘All Hallow’s Eve (John Linley Frazier)’ has a slight whiff of Sleep or Clutch about it in its pyromaniacal take on heavy psyche before the ‘Dusseldorf Monster (Peter Kurten)’ fades us out. At over 12 minutes long, the closer is the longest track CoM have ever recorded for a full-length record and slides with ease between solemn Sabbathian chords to energetic, boogie-scented hoedowns.

As if the all the preceding paragraphs haven’t been clear enough, I’m happy to categorically state that this is probably the best doom record you’ll hear all year. Whereas previous CoM albums have belonged purely to Fukasawa (or his predecessors’) entertaining lunacy behind the mic or Mikami’s none-more-groovy basslines, their latest effort would not have been possible without Kawabe’s majestic finesse in front of the guitar stack. As long as Black Sabbath remain in our memories, the world will continue to be blessed with sublime riffs and by thy same token, as long as our kingdoms remain riddled with scum of the lowest possible grade we’ll have Church of Fucking Misery. They’re STILL the Masters of Brutality and on the strength of this masterpiece that certainly won’t be changing any time soon.