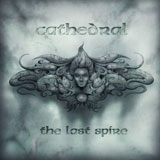 After more than a quarter of a century of utterly bonkers music that has transcended genres, frustrated purists and baffled as many fans as they have delighted, English doom stalwarts Cathedral are calling it a day, and “The Last Spire” is apparently the last we shall ever see or hear from Coventry’s heaviest. I should probably come clean about one thing before launching into my usual track-by-track gibberish: I haven’t really liked a Cathedral album all the way through since “Forest of Equilibrium”. Call me a dinosaur, call me a snob, but damn it I just switch off when the bouncy disco shite kicks in. That said, I’m the first to admit that Gaz Jennings’s guitar playing has been singularly brilliant throughout the band’s existence, and the very eccentricity that turned me off album after album is what has won the band a great many fans and devotees. This swansong is their most focused and outright heavy in years, which isn’t to say this record is a retread of their classic début, since that would be doing this really fantastic work of art a massive disservice, condemning it to the doldrums of mere nostalgia so common of late. I haven’t been this surprised by an album in some time, as this is really pretty bloody brilliant overall.

Opener “Entrance to Hell” is the seemingly mandatory introduction, with raven calls, feedback and tolling bells. We’ve all heard it in this context a million times before, and it never gets old – I’m not sure whether three minutes were really necessary, but that’s a minor quibble. The first proper track of the album leaves you in no doubt that you’re in the hands of masters; a fantastic wallop of a song, “Pallbearer” starts off as a slow crawl, with Dorrian’s morbid vocals mercifully bereft of the stoner-rock mannerisms that for me have marred so much of Cathedral’s output. He’s as over-the-top as ever, but there’s a sense of menace and madness that makes his performance throughout the whole album the most commanding thing he’s done since Paul Chain’s “Alkahest” (perhaps bar “Teeth of Lions Rule The Divine”). It’s a real shame we’ll (supposedly) never be seeing them live again, as this song would have become a real live favourite – I for one would have loved the chance to sing along “War! Famine! Drought! Disease” or, better still: “Gravediggers of the world unite!” The acoustic interlude in the middle functions nicely as a bridge between sections of the song, with eerie backing vocals from Rosalie Cunningham and some lovely atmospheric keys. It’s the speedy part that puts the smile on my face though, not least because there’s a part of it that sounds like Jennings has stolen one of the riffs from Slaughter’s “Death Dealer”. GREAT start!

The absolute standout track on this album is, without a doubt, “Condemned Cathedral” – the second riff is absolute, total FILTH, one of the best the band has ever come up with. Coupled with slide guitar and a mischievously melodic quiet bit, there’s really nothing I would change about this track. As if that wasn’t enough, the band have drafted in none other than Chris Reifert to do some creepy postulating. I’ll admit that I’m biased, in that for me anything with Reifert on it instantly becomes a thousand times better, but for this track it’s just the perfect icing on the cake. There’s even a touch of Autopsy in the twin guitar harmonies, but I guess that’s just a coincidence… Great lyrics too: “In shadows / you are alone / no afterlife / this is your home / living in the shadow.” No flying carpets, just misery – Iommi be praised!

Next up, it’s the album’s “single”, “Tower Of Silence” (apologies to High Priest of Saturn…); this was the first taster of the album that was released, along with a very enjoyable video. It was this mouth-watering snippet that got my hopes so high in the first place – the initial layering of guitar is enough to put a smile on any tone junkie’s face, before the track erupts into a lurching doom-dance of bludgeoning drums and bass. In fact, it bears mentioning that the rhythm section of this album is pretty damned brilliant throughout, but with long-term drummer Brian Dixon and none other than Scott Carlson of Repulsion fame on bass, it was unlikely to ever be anything less than stellar.

“Infestation Of Grey Death” doesn’t quite have the hooks that make the two prior tracks rank among the best in Cathedral’s lengthy catalogue, and is the one moment of the album which pays tribute to Cathedral’s mid-to-late-Nineties stoner rock phase, and as such is something of a lull in the proceedings, but seeing as this era is loved by so many fans, it’s likely many people will not find this a problem. The subsequent track, “An Observation”, is actually a very enjoyable experience indeed, as this is (to put it somewhat clumsily) the “prog track” on the album, a sprawling and utterly bonkers nine-minute delirium of cellos and analogue synths! Annoyingly, this is the best prog I’ve ever heard Dorrian and co. write, as in the past, the results have never quite worked comfortably for me. A beguilingly intricate piece that works a lot better than their previous attempts at the genre.

With a title like “This Body, Thy Tomb”, you’d be forgiven for expecting total “Equilibrium” on this song – well, Dorian doesn’t do the lugubrious drawl any more (o woe…), but the dirge-like nature of the riff and the mournful acoustic part in the middle are pure Candlemass, a fitting nod to one of the bands that sparked the band’s inception. But whereas on “Forest” the songs‘ tempos are all (bar one!) stubbornly set to “crawl”, the band treats us to one last proggy flourish with which to bid us a final goodbye, once again doing it better than they have previously! Barring a few fleeting dalliances with mediocrity (and the puzzling decision to put long-term collaborator Dave Patchett’s superlative artwork on the inside), this album really is the most enjoyable and cohesive effort I’ve heard from Cathedral in years. The production is modern without losing any warmth or texture – there’s a fantastic density to the sound of this album, that really gives a sense of the effort and care that has gone into putting this record together, not to mention the fun Cathedral seem to have had in the process! Best doom metal album of the year? Well, that space is reserved for the new Iron Man album, but it’s certainly going to be near the top, and is a very fitting end to a band that will remain as iconoclastic and inimitable in death as they were in life. Farewell, and thanks for all the riffs.