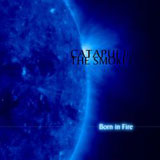 A couple of years ago a CD landed on my doormat with the force of a hand grenade and just about blew my nuts clean off. The debut album “Unearthed” by Catapult The Smoke was a lesson from start to finish in filthy riffing and pummelling beats. It is fair to say, however, that CTS are not the most prolific of bands and in the intervening two years I had started to wonder if they continued to exist until hey, guess what, someone slipped another tasty little bomb through my letter box.

Now this is where it gets confusing. “Unearthed” although released in 2009 was compiled mainly from recordings made in 2004, “Born In Fire” appears to have been recorded in 2006 so it seems the band are on a five year time lag!!! If they’re recording anything now I guess we can expect to hear the results around 2016!!!

Joking aside, it is pretty much business as usual in the CTS camp as “Born In Fire” picks up pretty much where the debut left off and from the start seems intent on sticking a filthy boot right up our collective arses. As with the debut it is almost impossible to pick out a stand out song and ultimately futile giving you all a song by song run through as from the opening balls out charge of “Always Favour My Side” to the closing strains of epic “Follow The Path of The Warrior” this is a consistent lesson in the execution of the riff!!! CTS occupy that middle ground between stoner and doom whilst tipping their hats to 70’s legends such as Budgie and Grand Funk Railroad. The spectre of prime era Sabbath obviously looms heavily over the band as do the fuzzy grooves of Kyuss and Fu Manchu albeit it with the darker shades of bands such as Trouble and St Vitus.

Every riff, and I mean EVERY riff is delivered with maximum impact and punch as guitarist Totte Martini seems to effortlessly peel them off almost without thinking. The vocals of drummer Tobias Larsson that were such a highlight of the band’s debut are still very much in evidence sounding like the bastard love child of former Spiritual Beggars man Spice and Soundgarden’s Chris Cornell. If anything though, this time the vocals are delivered with a little more piss, vinegar and aggression than before. In fact the album as a whole sounds darker and heavier than the debut. If I have one small criticism of the vocals, and it is a minor one, it is that Larsson has developed a stylistic habit of dropping the pitch at the end of nearly every line he sings. Although this does sound great in itself, over the course of the album I do find myself looking for a little more melodic variety, particularly as the guy possesses such as strong voice and does have a fine ear for a melody.

Once again the band have managed to achieve a killer production. The fuzz bass of Magnus Linhardt is pushed to the fore and blends almost seamlessly with the thick, syrupy guitar tones of Martini while Larsson’s drums hit you in the guts and threaten to force an unwanted expulsion of the contents of your stomach. It may not be pristine and Pro-Tools clear but it is exactly as it should be for the smoked out vibes the band are producing. You can almost smell the sweat in the room as you listen to this…in fact, check your walls aren’t dripping!!!

So ultimately, is “Born In Fire” as good as “Unearthed”? Most definitely. Is it a progression from the debut? Not really. Should it be? Difficult question, maybe, maybe not. A good album is a good album regardless. Perhaps after such a killer debut I would have liked to have heard the band push themselves a little harder this time round but having said that, this is still a five year old recording, who knows what the band are producing in 2011. Comparisons with the debut aside, this is still a killer riff fest that should go flying out of the shops into every home…let’s make it happen people!!!