Sometimes something comes along, so profound, that even after a long time spent examining it, you’re still not really any the wiser. Even after multiple attempts, you still feel like you’ve only really scratched the surface. Well, Breaths, brainchild of one mister Jason Roberts, is definitely one of those occasions.

Born out of the state of the events of last year, it’s certainly up there on works of art, that speak on multiple levels, and just when you think you’ve it figured out, it throws another swerve ball straight at you, and your back in confusion land again.

Lined in Silver, the debut work, is an epic, awe inspiring opus of such magnitude, it defies classification. Touted as a mix of post-rock, post-metal, doomgaze, and post-hardcore, I don’t think any of these truly captures the spirit of this outing. Well, maybe doomgaze is a good benchmark, or perhaps dark ambient. Its dark, brooding, introverted, and fully of melancholy. When it’s heavy it’s vicious, and when it’s ambient, it transcends all manner of feeling.

Beyond saying that you really have to witness this for yourself, to truly understand the experience, I will attempt to put my own experience in to words, with the hope it makes sense.

Right from album opener, the title track Lined In Silver, the melancholy slips straight in. Reminiscent musically of both Midas Fall, and Shiny Toy Guns, it has a dark, retro feel, which is only a very short-lived affair, before a darker, doomier side shows itself. The clean vocal of the first verse is replaced with growling a death metal vocal. This is both ominous, and threatening, and this parallel continues for the whole track. Where it shouldn’t work on paper, it truly does. It’s heartfelt, while somehow simultaneously being abrasive. I’m only seven minutes in, and it’s been emotional already. As the track ends there’sone last surprise, a child’s voice, to pull at those heart strings just a little more.

Track two, The Weight, The Bellows, enters in a more visceral way, somewhat like a prowling beast, menacing in the shadows. The pairing of clean vocals over the drudgy doom soundtrack really elevates this. Where it really works beautifully is that while I can listen to the vocal, it’s only when I step back that I truly notice just how heavy the backdrop is. In the breakdowns, when time slows, every little element sounds so dark. It shows that it’s not only those heavy, dank moments where the menace lies.

an epic, awe inspiring opus of such magnitude, it defies classification…

Like Wires ignites an industrial spark to proceedings, and it really sounds like an amalgamation of both Fear Factory, and Shiny Toy Guns again. It’s driving, bombastic, and anthemic. Its goth tinged too, with a real new romantic sensibility. Whenever the growled vocal kicks in, it’s a refreshing change, and keeps things lively, and dark, that for sure. As it stops and starts, it’s a jolting experience providing no comfort on this ride and just when you think it’s all over, it’s off again, a free for all of ideas, electronic, and thunderous.

The mostly aptly named track for the past twelve months is next, A Year On Fire, and I doubt there’s a better named song out there that truly captures the essence of the last year. It sounds like the soundtrack to a horror film, like a zombie apocalypse.The best comparison I have is that of Fear Factory Demanufacture era, with Burton C Bell’s haunting howls running over the apocalyptic soundscape. Throw in some demonic screaming, and it really adds a death metal feel to the mix.

In Nightmares ushers us in with an imposing drudgy doom introduction. It’s slow, dark, and menacing. If you close your eyes and listen, it feels like slipping in to the beginning of a nightmare. As the tune progresses, the sense of imposing doom becomes more and more a reality. It’s as if we’re going deeper and deeper, into the rabbit hole. As it levels off, around mid-way, it’s like there’s a moment of light, but doesn’t last. When the final third rolls in, the pace has dropped, with an air of respite. Again, this doesn’t last, and as it steadily picks up the pace, the mood descends, back into the darkness. This nightmare isn’t ending…

The Forgotten Ones continues along this path, with yet more episodes of clean verses growl vocal weaving their over the apocalyptic soundtrack. Penultimate track, The Inherent Emptiness really draws on a dark grungy sound, growly and atmospheric. In true grunge style, there are two lines that I take from the song. The first is ‘The dark swallows the light’, truly a hallmark staple of the grunge ethos. The other is ‘we all need to feel love’, something that I truly feel needs saying louder and more frequently these days. Its equal parts hurt, anger, and pain.

The finale to this album, In Repose, has a somber opening, and a real return to that eighties darkwave feel. It has a dark ambience, and a true feeling of loss. As the album ends, and the quiet returns, I reflect on what I’ve just been through. It’s a heavy journey, that for sure, emotional, dark, and powerful.

This isn’t your average heavy doomy album, and to dismiss it as such would be a great injustice. This is more an experience than it is a collection of songs, and if you dare to ride the rollercoaster, you will alight at the other end changed forever. 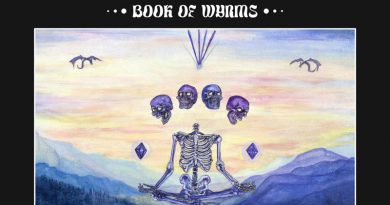