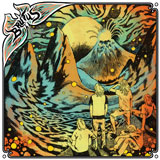 Now there are certain indicators when looking at a picture of a band that give me some clues as to whether I’m likely to dig them or not. Beards are a big one, if a band appreciates the pursuit of the hirsute and cultivates some fine chin growth then they have my respect. Secondly denim. If a band unashamedly rocks the denim and will go as far as to double or even triple denim it’s yet another good sign. Brutus certainly tick both these boxes so things look promising…if they had a fat bloke I would be completely sold but alas they don’t. I’m glad to say the lack of excess flesh in this case is by no means a deal breaker, the presence of abundant denim and facial hair is a strong enough indicator that this is a quality band!

Given that the band look like a bunch of Sabbath roadies it’s perhaps not surprising that Brutus are another in an increasingly long line of retro rocking Scandinavians nipping at the heels of Witchcraft, Graveyard and Horisont for a slice of the vintage pie. The above mentioned bands are all great in their way yet Brutus, for me, offer something a little more enticing. Whereas these bands plumb raid the past for their more esoteric moments, Brutus show due reverence and appreciation for the art of the boogie. Not Quo style three chords and head down boogie, this is a darker trip into the blues that tips its hat, inevitably, towards Sabbath but also references bands such as Blue Cheer, Budgie, Grand Funk Railroad, Buffalo and any number of proto metal pioneers. Where Brutus do share a sonic template with bands such as Graveyard with vintage amplifier tones and a pre aged, reverb driven production they somehow deliver in spades with a more straight ahead, hard rocking collection of soulful rock and roll.

Let’s face it, any band with a song called “Big Fat Boogie” simply can’t fail…and it does exactly that! Even when they ease back on the gas on a track such as “Blue Pills” and deliver a more restrained take on their amped up blues bluster, it’s a direct and effective punch in the nuts that showcases the tasteful guitar work and fantastic vocals.

Brutus have taken the elements of 70’s hard rock that made the genre fun in the first place…a sense of drunken abandon with an eye on the ridiculous, see the aforementioned “Big Fat Boogie” and also “Square Headed Dog” and Crystal Parrot” for proof, the latter of which features some very welcome blues harp wailing. This album reeks of a good time…beer, sweat, patchouli oil, denim and everything else that you would hope to get at some greasy dive bar full of chicks in flares and pigtails…or is that just a personal fantasy? Brutus seem acutely aware that the best rock and roll comes from the heart, the gut and the crotch with just enough brain to keep it all together but not so much as to make it disappear up its own arse.

Come the end of the year when our beloved editors ask us for our top ten albums of the year Brutus may or may not feature in a few but there’s a very good chance they may sneak onto mine…maybe not at the top of the list but there at least. 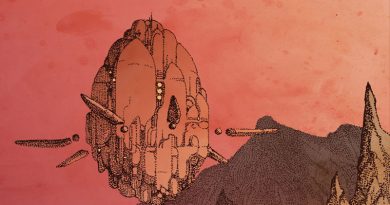