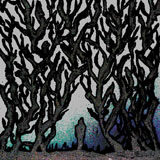 I’m not sure what they’ve been putting in the water up in Stoke on Trent, but the polycentric urban environment is rife for a band with a diverse set of influences. On their Self-Titled EP Bleak Zero draw together post-rock, metal, punk and hardcore and crash them head long into the core of previous band, the doom laden Raven Of Odin, to combine in a delicious way that should have fans of noise rock salivating.

The Potteries based four piece make music like the ghost of the sadly departed Amphetamine Reptile records stable by throwing all manner of confrontation and abrasive noise together. From moments of mellow introspection and ambiance to get in your face aggression, it is both music to soothe the savage beast, and the beast itself. Over the course of thirty five minutes they rage and run amok making the kind of bruising post modern noise rock Steve Albini could be proud of.

Opening with the cascading, pounding assault of Arbitrary System Whore (a title that intelligently challenges and flirts pretentiously with the best of them) the band show subtle progression as they beat the listener into submission with deliciously filthy riffing that builds on repetitive motifs and a raw emotional style. Slicing through the battering off kilter backdrop, singer Morph bellows and growls with vocals as raw as a bikers jean clad knee scraping on concrete. It is an aural boxing match as the band keeps ducking and weaving but still coming at you which fondly reminds me of Bloodlet’s Three Humid Nights In The Cyprus Trees for the uncompromising in your face grind.

The follow up, Less Of A Reason, begins as mellow as the opener was angry; gentle atmospheric guitar and drums courtesy of Lorna Dean and Mike Davies help shape a brooding seven minute Neurosis style epic that builds into a brooding and visceral piece of blunt force trauma that lurches with a downbeat, sideways (e)motion.

After this slow gestation, the band switch gears again back to the urgent savagery of Misophonic Petulance. This is a track brimming with menace that titers on the edge of sanity with an off kilter chug from Rob Hunt and a deep bass groove, before switching gears to the impassioned vocal plea that ends as abruptly as it begun.

Madman Possessed does what it says on the tin. An unsettling stop/start, see-sawing rhythm blended with intricate guitar flourishes and an almost irregular drum pattern that harks back to the 90’s alt scene. Despite this, the track transform’s into an intricate instrumental run that progresses and evolves into a grimy shoegaze with moments of pure experimentation and light passages made dirty by the scraping of fingers on strings and the reappearance of the a meaty bassline and Morphs vocals at the end.

The Spectator – Part 1 closes out the EP with the most considered inclusion of the lot; an eleven minute almost instrumental that wouldn’t be out of place on a Sons of Alpha Centauri album as gentle waves of almost ambient exploration wash over you. Given everything that Bleak Zero have thrown at you, there is still a measured level of tension which begins to manifest half way through when the music deepens and the vocals kick in. From this point there is a shift to the cascading style that began the album and the tender moments of picking give way to the unsettling groove and hammer blow percussion.

Bleak Zero want to try and inject Doom rock with the classic feel of angular Noise Rock and as an opening assault their Self-Titled EP is fairly unique in the scene. Capable of sounding like the lightest of indie bands one moment and like giants throwing cinderblocks at each other in a thunderstorm the next, they make a racket that will have you wondering where they’re going to take you.

At times it can be challenging to follow and if you are after a straight forward head bang then this isn’t going to be the soundtrack, but Bleak Zero are a confident, talented band who are looking to give the genre a shot in the arm.